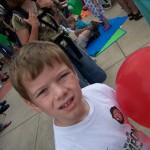 And of course, he got a balloon! 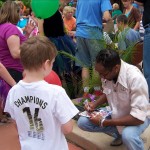 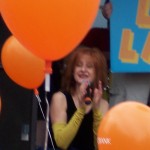 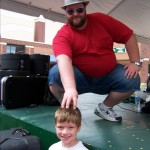 6 yo w/Tom the drummer from Milkshake Band!

Milkshake was awesome. We arrived late after an early snafu of leaving the battery for the camera at home. Battery retrieved and we were on our way.
The concert was set up outside the Westview movie theater at the Westview Shopping Center in Frederick, MD. Huge stage. My son and I walked around the back of the stage to get a better view since we arrived late. I showed him the generator, the rigging, and the back of the drum kit.
His attention waned a little bit early in the show as he wanted a balloon. He’s 6  — balloons are cool. I’m 40-mumble something and balloons to me are either something I trip on or I remember a time when my 18-month-old daughter let go of her red balloon in a parking lot. You’ve never heard the sobbing emanating from that tiny child. So heart-rending we drove to Toys R Us to get her another red balloon. Of course she took one look at it and started sobbing louder as she wanted the red Chevy’s balloon NOT the red Elmo balloon. Sheesh some people are never satisfied!
The best part for me was meeting the performers after the show. My son met Lisa — the singer, Mikel — the guitarist/singer, Cord — the guitarist, Tom — the awesome drummer, and Shepp — the bass guitarist. All were so nice with my son…really took the time to talk to him. He was especially interested in Tom the drummer as he has a drum kit and really wants to play.
I talked to Lisa and Mikel about the time we saw them at the end-of-summer wrap up show at the Damascus Library in Maryland about 4-5 years ago. I took my daughters…my son was a baby so stayed home with dad to nap. The show was the first rock concert the girls had gone. The kids sat on the floor while the adults sat in chairs around the room. I loved the music.
We purchased the Happy Songs CD. We’ve played it nonstop since the library show.  Today we picked up Play. I predict more listening pleasure with the Baseball and Pirate songs from the new CD!
Check out www.milkshakemusic.com for upcoming shows! Stay tuned for a giveaway!