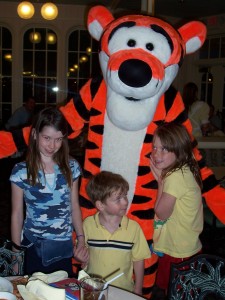 I posted here about doing a Disney trip with kids. Here are some more tips on going to Disney with kids:

– Pick the time you travel carefully. In my pre-kid days, I visited Disney in July and August…never again. Too hot, too crowded. In my post id life, we chose our travel time with the kids and the grandparents in mind. The first time we chose October. We travelled just after 9/11. It was a scary time to travel. Although Disney was more thorough in its searches and security checks than the airline we flew on. The second time we flew in November. Both times Disney was not crowded. We walked on some rides. Had no problems getting reservations to Disney character breakfasts.

– Read height/age requirements in advance. We had a good guidebook for Disney with Kids. I had my son stand in line for Space Mountain only to find that he was a hair too short to ride. I placated him with Buzz Lightyear’s Ranger Spin, but he still talks about going back and riding it. The attendant gave him a certificate since he could not ride.

My only regret about travelling to Disney was not getting a reservation for the Princess breakfast at Cinderella’s castle. The second trip my girls were too old.