I’m still pinching myself. Was I really at Disneyland this time last week? Was it a dream? Our trip to California was truly magical. I can’t believe all the fun we had. We were definitely touched by the Disney magic!

Going to the Disney Social Media Moms Celebration has been on my “Bucket List” for quite some time. This is the 5th year. It’s an invite-only exclusive event. I never thought I would receive an invite. I’m not a “big” blogger. I do blog about Disney Parks and Disney movies, but I didn’t think I was on their radar. Not to sound corny, but receiving an invite was a dream come true. Prior to receiving the invite, my husband and I had been planning a trip to Walt Disney World. As we priced out flights, figured our hotel accommodations, and looked at Park Hopper tickets, we were getting more and more worried about the cost. We are a a family of five and travel is always so expensive. We had put the Disney trip on the back burner, when I got an invitation the 5th Disney Social Media Moms Celebration in Disneyland. After a quick discussion with my husband, we were ready to go to Disneyland! 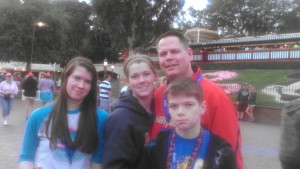 My children are in 5th, 10th, and 12th grades, so I needed to be sure that they were O.K. with missing school. They are all good students who miss very little school, plus we have had about 9 snow days off school. Not surprisingly all were willing to miss school for #DisneySMMoms even though they knew that they would have to make up missed school work while we were in California and once we returned home. Under the circumstances, their teachers and schools were very understanding about our unexpected vacation to see the most magical mouse in the world.

The run up to #DisneySMMoms was epic. In true Musings from Me family fashion, we had my middle daughter’s Confirmation the Sunday before we left. I had three local blogging events to attend. My husband had lots of work to do at his school. Kids had homework, sports, and practices. I did load after load of laundry, but I knew that none of us would pack til Wednesday night at the earliest. And pack we did. With two adults and three kids who are rather “last minute” type of people, I have learned over the years to insist that all suitcases and backpacks are packed and stacked by the back door the night before an early morning flight. We left more or less on time. Arrived at BWI more or less on time. Got through check in a little later than planned as the ticket agent had a malfunctioning luggage label machine. Security was a easy for everyone except me. Apparently the zipper embellishments on my pants were causing a problem for the scanners. Who knew? On the return journey I ditched the zipper pants, but I still had a pat down due to “glow from my wrists.” Seriously I cannot make this stuff up. 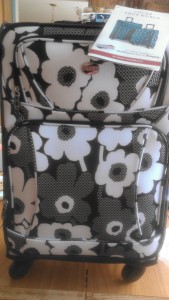 All of the attendees at #DisneySMMoms were sent a suitcase from American Tourister. Did you know that American Tourister is the official luggage of Walt Disney World and Disneyland? I was thrilled to receive the Color Your World Spinner in Black and White Floral. I could always spot my bag on the luggage carousel and my son even saw my bag as it was loaded on to the plane. Very eye catching. Sturdy too! The spinner wheels came in handy when I had to make sharp turns in the airport and hotel.

There were so many amazing moments at the Disney Social Media Moms Celebration that one blog post just won’t do it. Stay tuned for more blog posts on our amazing trip to the Magical World of Disneyland!

Disclosure: I was invited to attend the DSMM Celebration. I paid my own conference fees and received gifts during the conference. All opinions, experiences, and thoughts are my own

← Proud To Be a Papa Murphy’s Mom! #papamurphysmom
Spring in to Spring with Home Depot and @Savings #SpringIntoSavings →