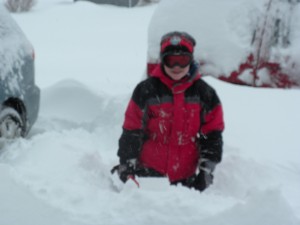 Remembering the last BIG snowfall to hit the DC Metro area. The snow was up to my son’s waist!

I’m a creature of habit. If I do something and like it, chances are good that I will do it again. It is not that I don’t like change…I do…but I’d rather not reinvent the wheel. I am researcher by nature. I’ll search and explore and find something I like. Once found, I want to experience it over and over again. I happened upon Mommy and Me music classes. Once my oldest and I experienced a music class together that was it…I was hooked. Music classes were a fun way to bind with my toddlers and preschoolers. I’m the same way with Toy Fair.

I’ve been in the social media sphere for a long time. I started a Facebook account on September 1, 2008. Wow, that is a long time ago! Twitter came in to my cross hairs soon after. I don’t recall the date of my first tweet. And before Facebook and Twitter I had a blog. My first post was January 2, 2008. That’s 5 years ago! Much has happened in 5 years…in 2008 my kids were 5, 10, and 12…and I was…well let’s not get in to details about how old I am…moving on…

In 2008, I logged in to social media sites, joined brand-blogger organizations, wrote blog posts, tweeted, and posted regularly to Facebook. From 2009-2010, after making the connection that bloggers like me were writing about products they loved on their blogs. Soon, I had a steady stream of packages delivered each work. Lots of boxes of goodies to play with…uh…review for my blog. Back then I pretty much accepted any and all pitches from brands to review and write about their stuff. Once I got the hang of blogging I began to see that I couldn’t keep on taking on  so much work. I cut back. 2011 I focused on the product lines I loved and moved away from the ones I was meh about.

One staple in my blogging repertoire is Toy Fair. Held annually Toy Fair — held at the Javits Center in New York City — is a monolithic event. Every toy manufacturer has a booth at Toy Fair. It’s a who’s who of the toy biz. I attended in 2010, 2011, and again in 2012. I wouldn’t miss Toy Fair for the world.

In fact, I started, but didn’t publish a post about my decision process involving Toy Fair. I’m a decisive indecisive person. This is what I wrote:

One thing I knew for sure, I wanted to get to NYC early and by early I mean EARLY. Arriving in NYC at around 7 a.m. meant I left Baltimore at about 3:30 a.m. And yes, I had to go to bed at 9 p.m. to be able to get up that early. I. Am. Not. a. Morning. Person. Early morning or not I was so thrilled to go to Toy Fair.

2011 and 2012 my visit to Toy Fair was just as fun as my first. I did more preparation in 2012…got smart and set up appointments with reps at booths that were in the same general location at the Javits Center. In 2010 and 2011, I was not so well prepared. By the time I left the Javits my feet were sore and my back was killing me from hauling several large-ish review samples. I got wise in 2012 and asked reps to send review samples to my home. My plan had been to return to Toy Fair this year, but my plans didn’t work out.

So, why didn’t I go this year? Hmmm…that’s a toughie to answer… I scoped out train fares back in the fall. Checked out the BoltBus and MegaBus schedules. Contemplated staying at a hotel. Decided to do Toy Fair as a day trip…a long day…but I am made a strong stuff and know I can pull a busy day off. But as January moved in to February, I knew I couldn’t go. Just not enough hours in the day or week. Too many commitments at home. Three kids who need to get to school, sports, and activities is just one of my scheduling problems. Then there’s carpool, which is a necessity for me. But I am in several carpools and scheduling is challenging. Finally, snow was due to hit New York. Snow has been oon it’s way to D.C. this entire winter, but we’ve had nothing. With snow coming down in NYC, my umph to go to Toy Fair was gone. I did NOT want to get stuck in NYC…I didn’t want to get stuck on the train. So I stayed home.

I had planned to purchase a ticket on spec so was out no money. I know I made the right decision not to go. My kids are a little miffed that I didn’t bring back any swag. Relax kids, there’s more swag out there. Staying home allowed me to go on about  my week as planned without complicated arrangements. And I’m ever the optimist and 2014 is just around the corner.

← What Laws Would You Pass If You Were President?
Method Acting Gone Wrong, Sing-a-Longs, and More #Oscars →