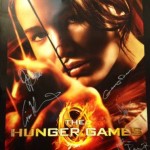 I was late, very late jumping aboard the Hunger Games train. My Teen bought the books from the school book fair in 7th grade. She’s now in 10th.

She’s quite a trendsetter with books. She read through the Junie B. Jones books in K before most kids were able to read a chapter book independently. She was an early adapter of the Harry Potter books. From about 3rd grade onwards, she read first one book, then two, and so on. When we visited the Wizarding World of Harry Potter, she pointed out minute details that I would have missed completely. By middle school, she had already read the Twilight books. Now, when many of her friends are anxious to see the next movie she’s over the series.

I walked past the shelf in her bedroom many times before picking up the Hunger Games. About 4 weeks ago, I devoured the Hunger Games, followed quickly by Catching Fire. I’m working my way through Mockingjay. I was determined to see the movie on opening weekend. I’m kind of a cheapskate when it comes to movies, but didn’t begrudge my Tween-now-Teen the chance to go. My Teen opted to see a local high school musical instead. She has issues with some of the director’s choices in Hunger Games. She’s staging a protest by not seeing the movie. She takes issue with the color of Katniss’ gown for instance. Don’t get her started…it’s not pretty.

The Kid was deemed too young to go. The theme within the book of teens killing other teens to survive is a harsh one. Older kids will understand that Panem is a civilization in the future where there is a new world order. My son at 8 would not understand this distinction. As I made my decision about whether to take my son or not, I relied on the Common Sense Media review by my fellow The DC Moms colleague, Sandie Angulo Chen.

Armed with tickets we opted to spend time together as a family…separately. It sounds odd but it worked for us. I dropped the Teen at the high school musical. The Tween-now-Teen and I headed to Hunger Games. My husband and the Kid caught an early showing of The Lorax before picking up the Teen. Everyone was happy. Everyone got what they wanted. We did family time our way…the Musings from Me Way.

← Simple Toys Are the Best #bestpals
It Was a Puddle and a Big One, Too #cloroxlounge →