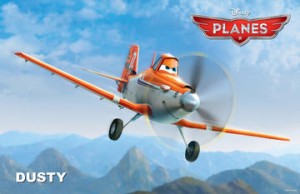 I’m a bit of a cheapskate when it comes to movies. I need to get my money’s worth out of a movie. In college I saw a bunch of movies each year thanks to a frequent punch discount card. I’ve bought movies tickets through Groupon or used the ones in those Entertainment books. I LOVE receiving a gift card to a movie for my birthday or Christmas.

From time to time, I’ll leave a movie and think “That was SO not worth $12.” In order to get my money’s worth if at all possible, I evaluate each movie using the following Q&As:

My system works as I rarely leave a movie theater disappointed. The kids and husband are a bit less worried and given the chance will see any movie at the movie theater. They can’t get enough of movie popcorn and bottomless drinks! 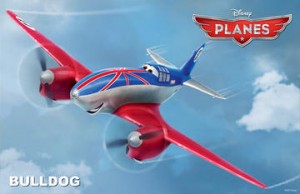 As a blogger from time to time I get perks that others don’t. These “perks” might mean I can take my family to see the circus in exchange for running a giveaway for circus tickets. Or I can take my kids to a local children’s museum if I agree to Tweet/Instagram/Facebook while we are visiting.  Another perk is movie screenings. Probably once every two months I get a chance to go to a screening for a movie, mostly kids’ movies, but occasionally I get a chance to go to new drama or chick flick.

This week I took my younger children to see a screening of the new Disney movie, Planes. Back when Cars was first released, we saw that film several times in the theater, and watched the DVD an extraordinary number of times. In fact, we STILL quote from Cars.

At one point my son had a Cars lunchbox AND a Cars backpack. I was so obsessed…uh…eager to get my son the entire Cars collection of Happy Meal toys that I may have driven from McDonalds to McDonalds asking one bewildered cashier after another “Do you have a Sarge that I can trade this Lightning McQueen for?” Not that I was obsessed or anything…but I did collect the entire set. Took me a while!

My son had hours of fun reenacting the movie, Disney’s Cars, while playing with the cars from the movie, while watching the movie…and he was probably wearing a Cars shirt, too! 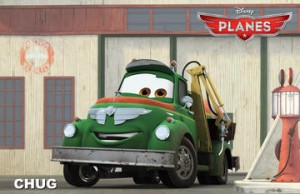 And a World of Cars movie wouldn’t be as good without a trusty sidekick. Think of him as Mater’s long-lost, but more on-the-ball cousin, Chug

Now that Disney’s Planes is out, I knew my kids would want to see it, so when invitation came for the screening I wasted no time RSVPing. I was so grateful to have the screening to go to, first, because it is one of those blogger perks that we love, and second, because my oldest and my husband were out of town for a few days. The younger kids and I were missing them. Days seem long when two family members are gone, you know?

On the day of the screening, we had a morning of playing, doing summer workbooks, and a little screen time. By late afternoon when we were thoroughly rested, we piled in to the ole minivan to head to the screening. In the Musings from Me Family, when we attend a blogger event everyone shares their thoughts on the experience. Helps me to write the review. But more importantly, we have a chance to discuss the experience as a family. So what did we think of the movie?

My only quibble with Disney’s Planes is that the graphics and animation weren’t nearly as good as Disney’s Cars. Of course compared to other animated kids’ films the graphics in Planes was pretty good. The storyline was not as multifaceted as Cars, which I was disappointed by, but I think younger kids will enjoy that Planes is mostly about the air race. What I found most intriguing about Cars was the attention to detail. In every frame of the movie, there was a photograph or a bumper sticker or a funny looking car in the background that showed the attention to detail of the Disney animator. All in all this movie was a good one for kids and a great movie to go to on days when kids are climbing the walls or it is raining cats and dogs!