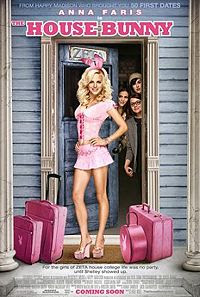 My 12-year-old daughter wanted to see The House Bunny. Let me back up a bit… I didn’t know she wanted to see it until she told me a group of friends saw the movie over the weekend. I immediately went in to “why was my child excluded mode?” I know, I know not my finest hour, but I do get miffed when I find my kids were excluded. I never, and I repeat never, call the host and complain about why my child wasn’t invited. I think this is very rude. I have had calls from parents asking me and I think that their questions are intrusive.

I did call a close friend to ask her what she knew of the movie event to see The House Bunny. She told me that it started as an outing for one group of girls who participate in an activity in which my daughter is not involved and morphed in to including another group of girls in another activity that my daughter is not involved in. After talking to my friend I felt a little better, because at least it was a group activity and my daughter wasn’t excluded on purpose. It is just that she plays a different sport and has a different group of friends.

I am still wondering why a group of parents allowed their 12- and sometimes 11-year-old daughters to see this film. From what I can gather from previews the film is about a woman who returns to college, joins a sorority, and makes over a group of sorority sisters who are a little geeky. I suppose not totally awful, but is it appropriate to have a group of young girls exposed to a former Playboy bunny giving makeover tips so that the girls can get a boyfriend. I am sure there are sexual innuendoes, as well.

The kicker…my daughter later revealed that a friend had asked her to go tot he movie and she said “no” since she knew that I would say “no.” I told her I was proud of her. I also told her to talk to me since all these pre-teen and teen issues are cropping up more and more. I’d like to have a discussion with her before rather than after.

← What Is It About Facebook, Anyway?
Calling Moms of Toddlers →