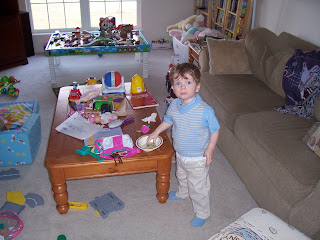 Adventure Boy — aged around 2 — in our family room/playroom. You can see the train table in the window for our Thomas the Tank Engine fan.

I responded to a HARO request about TV viewing of toddlers. The perfect post for National TV Turn-Off Week! Here are my answers to the reporter’s questions.

Does/Did your child(ren) watch television before the age of two-years-old?

My kids all watched some TV before the age of 2. My oldest did not watch TV until she was 1. I would have the TV on while she was an infant as background noise. I watched Regis & Kathy Lee, as well as a ghastly talk show with George Hamilton and Alana Stewart. At the point where I watched the SECOND Regis & Kathy Lee Valentine’s Day wedding, I realized I had to make a change. I turned the channel to PBS and never looked back.

What was/were their favorite show(s)?

My fave kids’ show of all time is Sesame Street. I watched it as a kid and my son is still watching it.

Crafty Daughter — now a teen — loved The Big Comfy Couch, Sesame Street, and Blue Clues. A friend hooked us up with the goings on of Blue, Magenta, Tickety Tock, and Mailbox. We never looked back.

Sporty Daughter — now a preteen –loved Bear in the Big Blue House, the Teletubbies, Sesame Street, and Blues Clues. I recall watching the first episode of The Teletubbies with my then infant and my almost 3-year-old. My oldest was mesmerized by the colorful Teletubbies. I loved the little vignette of an English boy riding a tricycle. My daughter cried when the show was over. Sporty Daughter grew up watching with her sister.

Adventure Boy — now a kid — loved Baby Einstein DVDs, The Wiggles, and the Sesame Street. I must confess to not “getting” The Wiggles. The songs were O.K., but the acting was awful. I wanted to gouge my eyes out anytime Captain Feathersword came on the screen. And the dancers in the soldier outfits. just say no to the Irish jig! And let’s not get in to Wags the Dog who sometimes had long ears and sometimes short. I gladly consigned the Wiggles DVDs and toys.

Why did your child(ren) watch T.V.?

TV was usually on in the morning as the children played in the family room. Sometimes we would watch together. Sometimes they would ignore the TV.

TV was turned off in the afternoon. I would sometimes put the TV on to make dinner. No TV was watched in the evenings by my babies, toddlers, or preschoolers. This rule changed once my oldest started school. I needed my youngest to watch TV so that I could help my oldest do her homework. My oldest would get upset most nights about missing TV, but I found it too hard to help my 1st grader with her homework and make up work for my preschooler to do. So, the TV was the answer.

We never established the pre-bedtime TV show as I found it hard to tear my children away from the TV. We also have never allowed TVs in the children’s rooms.

What if I told you that researchers found out that a two-year-old watching T.V. has no cognitive benefit; would you feel differently about your child(ren) watching TV? Why or why not?

No, because my kids liked watching colorful puppets on TV. My son was fascinated by the Baby Einstein DVDs of kids playing with toys. He would go and find a toy similar to the toy on the TV.

As an aside, when my youngest was 9-10 months old we participated in a study through the University of Maryland’s Speech Language lab where we were supposed to play a video on 10 separate occasions when my son was in the family room. We were to record how long my son watched the TV, how often he left the room, and how often he came back in to the room. The video showed children playing with toys, but the soundtrack was nursery rhymes told in Mandarin Chinese. We took him back to the lab where he sat in a soundproof booth with one of us. He listened to the nursery rhymes in Mandarin and Cantonese. The researcher recorded which way he turned his head.

So, what kind of TV shows did your toddler enjoy?

2 comments for “Musings on TV Watching by Toddlers”