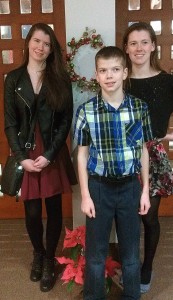 Giving back. I teach my children to give back. I encourage them to bring in food donations…toys for an adopted family…mittens for the “Christmas Glove Tree.” Basically, if the school or church asks for items, I’m happy to provide items.

I lead by example. I show them that I donate clothes, toys, and household items to local charities. My kids go through their toys to decide which ones to donate to charities. I do my bit. They do their bit.

I drove a group of teens, including my daughter, to the soup kitchen early one Sunday morning. Earlier than regular Mass time. We had to leave early to be ready for our lunch-time meal service. The kids were from high schools all over our section of Maryland. My church borders four counties. There were two kids who were at the same high school. The rest didn’t know each other. There was chatter as I drove that day. Asking questions. Who played what sport. Who had been in what play at school. As we entered the city limits of Baltimore from neighboring Baltimore County, the chatter in the van came to an abrupt halt. All eyes were glued to the scenery. We drove under a bridge where a group of homeless people were sleeping on couches. We drove through some really rough neighborhoods. Instinctively I checked the car door locks. It’s one thing to be in these neighborhoods during the day, another thing entirely to drive through late at night. The kids were processing what they saw and so was I. This was a very different community than what we are used.

My kids, like the other kids in my van that day, have very few needs that aren’t met. They have shelter. A warm place to stay. Food to eat. They go on vacation. Never have to worry about where their next meal will be. Never have to wonder if there is money for school supplies or a school trip. My kids are very fortunate, indeed.

I entered the soup kitchen through a gate, parked, and the teens and I were buzzed in to the building. Once we were inside, the staff instructed us to wash our hands and suit up with aprons and ball caps. The teens joined a couple of other groups of teens for the orientation. We were told to be respectful to the people coming to the soup kitchen for lunch. They were to be treated as guests…customers if you will. We were to be cordial to them but not engage in conversation. One phrase stuck with me…”You want to solve their problems, but you are not equipped to solve their problems nor is it your job.” Sounds harsh but really that advice was very valuable. I’m a bit of a problem solver. I sat back and did my job, instead of trying to help everyone find a solution. I cleared tables. Helped kids to choose books. Refilled drinks. My daughter and another teen were stationed in the family section for the noontime meal.

I would be lying if I wasn’t appalled at the sheer numbers of families passing through our section that day. Moms, dads, and kids. Dad and a couple of kids. Mom and a kid. Grandparents and several kids. The hardest part was when a teen arrived with his family and refused to eat. He refused to get a meal from the serving station. He refused a drink. He sat stoically while his family ate the meal. He wasn’t aggressive. He wasn’t rude. He was standing his ground like teens do. His mother was clearly mad at him. A mom mad at her teen for being obstinate? I can TOTALLY relate to that. But how could you be mad at a teen who is standing his ground in such a circumstance? He didn’t want to be there, but had no choice. All I could think about what was if I was at the soup kitchen with my teen. Took me a few moments to compose myself. I hoped that the family would buy the teen food after they left the soup kitchen.

That morning we served so many families who were going through tough times. Many were the working poor. Most were not homeless. Eating at the soup kitchen daily or even just on the weekends allowed some families or individuals to afford their rent or utilities. A sobering thought indeed.

I know I complain about my lot in life. I have no reason to complain about anything. I am very lucky. I have a healthy family, a roof over my head, and enough to eat. If it is easy for me to forget to count my blessings, I know that my children have the same troubles. Volunteering at the soup kitchen that Sunday morning was the perfect activity for that group of high school sophomores and me.