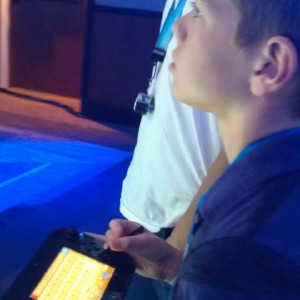 Engrossed in Wii U

Let me make one thing clear. I’m not a gamer. I’m the parent and wife of gamers, but not a gamer myself. In fact even in my heyday of gaming, I probably played Ms. PacMan about once a year. I never had an Atari or a Commodore, though my husband did. I don’t use video games as a stress reliever or boredom buster.

My husband and children are another story. When my husband was knee deep in his PhD research he barely came up for air. Once his PhD was in hand he treated himself to a gaming device. It was his reward for all those nights spent toiling at the computer. Fast forward a few years to a time when our children were clamoring for a game system of their own. The kids saw how much fun Dad had playing video games and then wanted to play.

We purchased our first Wii system during our summer staycation. My son was about 5, and his sisters about 10 and 12. What started as a way to play video games became a key part of our staycation. Even my little guy was able to use the Wii remote control to play a few games. My husband had the hardest time adapting to the shape of the Wii mote. In time dad and kids were happily playing and leaping and frantically waving their arms at the TV. A good time was had by all…and I even got in on the act! It’s hard to sit silently when everyone around you is having a blast!

Edited to add: Tune in to nintendo.com/WiiU to learn more about WiiU.

Tune in for our family’s experience at the Wii U event in Washington, D.C. I’ll post about our experience with the soon-to-be-released Wii U in a few days. Stay tuned!

← Are You Jumping on the iPhone 5 Bandwagon?
Just Keep Swimming! #FindingNemo3D →