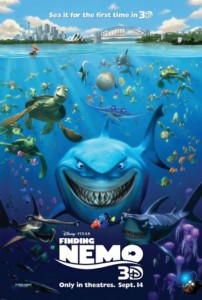 How many people have titled their Finding Nemo posts like I did? #thingsthatmakebloggerslaugh

Nemo is one of those films that quickly became a family favorite. I loved the nod to the old 20,000 Leagues Under the Sea ride at Disney World. Remember Captain Nemo? In fact on trip to Disneyland we found a new submarine ride featuring Nemo and friends. My kid and I parrot lines from the movie all that time.