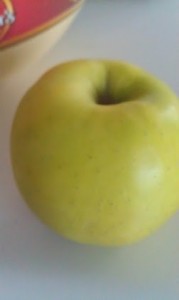 One such saying in our house is “Don’t hit the doggie with the apple…doggie cry.” Why do we say this? Why would anyone hit a doggie with any object particularly an apple?Why indeed.

Quite a few years ago we were apple picking with a friend and her boys. The day was hot. My little ones had never been to an apple orchard before. There was excitement in the air.

At 2 and 4 both were chomping at the bit to pick apples from the moment I mentioned we were going apple picking that clear August morning to the moment our van pulled in to the fruit picking farm. I was looking forward to the new experience and to spending time with my new friend and her children.

We met up with our friends and proceeded to walk to the apple orchard. I didn’t want to come home with bags and bags of apples. 2 or 3 would have been fine by me. My friend is a baker and had plans for apple pies so she grabbed a sturdy plastic bag for each of her boys and herself. My kids had to have a large bag, too.

Oh my, what was I going to do with all the apples taht the kid were pulling off trees with wild abandon and stuffing in to the plastic bags? What happened to the “2 or 3 apples.” Why was I suddenly loaded down with bags of apples. Apples are heavy by the way. Very heavy.

As I staggered down the rows off the orchard, I lost sight of first one kid, then the other kid. I’d have both in my sights for a few seconds. And then pouf the kids would be off running and having the best time. Soon the kids were all running about, which was when I saw the dog. Not too big. Not too yappy. But definitely made me wonder what to do. My kids are not used to dogs…not then and only a little better now.

So picture if you will a bunch of preschoolers and a toddler running about an orchard when a dog ambles in to view. The dog was excited to see the kids. The kids were either terrified of the dog, wanting to pet the dog, or in need of playind catch with dog. The kid who wanted to play catch? Was none other than my fiesty toddler. Before I could do anything she had grabbed one of the many apples lying on the orchard ground. She held that enormous apple in her hand for a second or two. As I had the thought, “Hmmmm, she might throw it…would she throw it?”, she picked up the apple and winged it in the general direction of the dog. For a toddler she had wicked aim. She almost hit that dog.

I quickly moved to rid the toddler of all apples. The toddler was a little shocked. Not one to let an opportunity pass without peppering me with questions, she lauched in to a cacophony of “Why?” We can’t throw apples. We have to buy the apples that we pick. And finally you can hit the doggie with the apple. It was the final answer that stuck for the rest of the day and indeed whenever we saw any animal of the four-legged doggie variety. I chuckle to remember her worried face as she solemly stated “Don’t Hit the Doggie with the Apple…Doggie Cried.”

What have I been up to this week?

5 comments for “Don’t Hit the Doggie with the Apple”