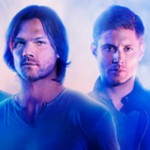 I rarely watch shows in real time. I only watch DVR’d shows. I go through the DVR every day or so and watch my DVR’d shows.  If I am not watching DVR’d shows, I’m watching on Netflix. Unfortunately Netflix doesn’t have every show or even every movie in stock. So I watch whatever shows I can find on Netflix. If I forget to DVR a show or cant find on Netflix, I have to either record the show again or wait for the show to come out on DVD or BluRay.

If I find a show I like, I have to “work” to watch that show. So, when I find a show, I will watch every episode in one sitting. I watch House of Cards (U.S. version) over a couple of days after my knee surgery. I binge-watched Orange Is The New Black a few days in to the new school year, when I was so exhausted by life and everything. I started to watch Breaking Bad when I recuperated from knee surgery, but I had to keep turning the TV off when the kids were home.

When I strike out on DVR and Netflix, the next best thing is getting a beloved TV show on DVD or BluRay. If I have the DVDs, I can watch whenever I want and wherever I want. I’ll catch up on a show waiting for a kid at soccer practice or hanging at Starbucks going through emails. I was asked to review Season 9 of Supernatural. Truthfully, Supernatural wasn’t on the top of my must-see list, but I had watched a bunch of episodes in Season ?? with my teens and liked it.

To recap, at the end of Supernatural Season 8 ended as:

Season 9 begins with Sam dying from what happened at the end of Season 8.  The “exhilarating and terrifying journey of the Winchester brothers” continues with the ninth season of Supernatural.

What you need to know…

Disclosure: I was sent the BluRay to facilitate my review. The views expressed in this post are my own. Affiliate links are to my amazon account.

← Following, Not Leading Your Child’s #JourneytoCollege
The Grand Opening…or So I Thought →