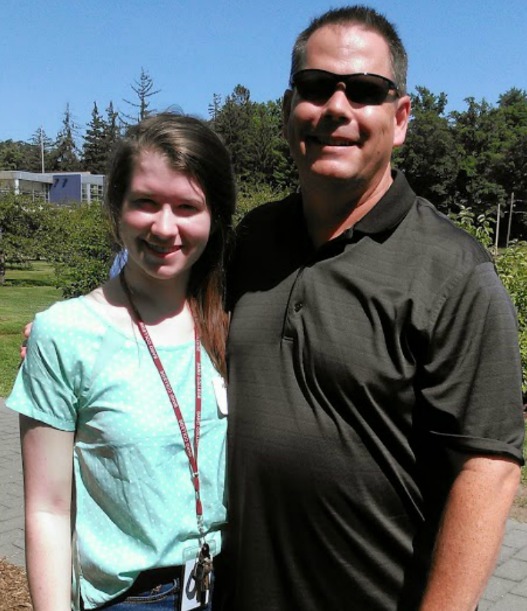 My oldest child is a trailblazer. She’s my “out of the box” thinker. She does everything her own way. She’s the child who informed me after a lengthy timeout when she was 7 that she would do what I asked her to do next time but only because I asked her not because she thought I was right. She’s a one-of-a-kind kid. She’s also the oldest grandchild on BOTH sides of the family. Her first EVERYTHING was cause for celebration and rejoicing. Her first step was akin to Neil Armstrong’s first steps on the moon. Had she been born in the Facebook era I would have bombarded my friends with photos, videos, and all manner of posts about her firsts.

As the first child/grandchild, her educational journey was equally ground breaking. She was greeted off the kindergarten bus on her first day of school by two grandparents, one aunt, one sibling, and two cousins all holding balloons. Talk about fanfare!

Her college search was an amazing experience for all of us. Her search began at the age of 5. After seeing her dad get his PhD, she declared that she would attend his alma mater, the University of Maryland at College Park. She was bound and determined to go there. She wouldn’t acknowledge any other potential choices for college. By 10, she reluctantly said that she would apply to Penn State…but would go to College Park.

By the summer before her senior year I was concerned that she had toured zero colleges. Her dad and I were both concerned. He took matters in to his own hands and planned a whistle stop tour of colleges in North Carolina and another college visit to schools in Pennsylvania. Slowly but surely she admitted that she might consider applying to a few other colleges. I didn’t press her on which schools she wanted to apply to for fear that she would change her mind, but I was overjoyed by her decision.

Encouraging her to visit other schools was the sum total of my involvement in her college search. My daughter was the driver of the college search bus. She researched colleges online. She pored over the Fiske college guide. She read reviews. My role in the process was to give her my credit card information for the admission fees.

Watching my daughter compile the list of colleges to apply to was so interesting. In true “out-of-the-box” thinker fashion she applied to two colleges that I had never heard of, but turned out to be very highly ranked. She selected a pair of colleges in a state she had never visited, but both had programs that were a perfect fit for her. Again…this kid DOES her research. She applied to Maryland and Penn State as expected, but though she was accepted at both with scholarships, she decided not to attend either. She wanted to keep her options open. She applied to my alma mater — Franklin and Marshall College — and I could not have been more thrilled. I knew she would probably not choose to go there, but I was excited that she might get to have the awesome collegiate experience that I had. She applied to a few other colleges in the south and a couple of schools in Pennsylvania.

By mid-January, her applications were signed, sealed, and delivered. All she…we…could do was wait. And the wait was SO hard. Far harder than when I applied to college myself. We…and she…experienced all manner of emotions. The highs. The lows. And the in betweens. She was the driver of the college search train and we were but passengers. Anxious passengers, of course.

As the acceptances came in, we sat back and waited. She asked for our input. We gave it. We talked to her about financing college and she listened. She talked to us about what she wanted from a college and we listened. Finally, in April there was a decision. We held our breath. She was cool, calm, and collected after she made her decisions. We were the nervous wrecks while she was in control.

Our role in the college search process was an advisory one. My trail blazing daughter’s search will help as Child #2 and Child #3 prep for their college searches.

Disclosure: This is a sponsored post for SheSpeaks/Kaplan Test Prep. I received compensation to write this post, and any opinions expressed are my own, and reflect my actual experience.

← Getting a Good Night’s Sleep #FoodforSleep
Gift Guide: Catching Up with #Supernatural Season 9 →