BlogHer was a whirl. A veritable blur of activity. I had my family with me, which added to the chaos. Although really I was so much in my own world of BlogHer that I hardly noticed my family. I don’t mean to sound like I didn’t care about them. Far from it. I texted my husband each day to find out about their adventures. When I spotted my husband’s tweets about Shamu or the beauty of the San Diego Zoo, I would smile knowing that they were happy doing their thing and I was happy doing mine. I chatted to whomever was awake when I left the room each morning. I watched as the kids chose which swag items they wanted.

In short, BlogHer was fun for me and San Diego was fun for my family. It was the best of both worlds. And to think I was worried about bringing my family to BlogHer!

My oldest had a couple of brushes with all that is BlogHer. Leaving the San Diego Marriott Marquis & Marina one day she spotted a group of women in the hotel, she said to her dad “Those are mommy’s type of people!” At first I wondered what she meant, but then I pictured myself standing with a group of women…eyes alert, swag bag on shoulder, phone in hand, casually dressed by day, formally dressed by evening…so yes I can see that I fit in with the blogging women that my daughter saw at the Marriott.

On another day she was waiting for the elevator with her dad and siblings when the elevator doors opened to reveal men in matching shirts surrounding the Jimmy Dean Sun Guy. I WISH I had been there to catch her expression of surprise!

Our celebrity sightings weren’t limited to BlogHer, though. After BlogHer, we journeyed to Anaheim. On one of the days of our stay we took our lives in our hands on the LA freeway. Yikes it was busy and it was only 10:30 a.m. What must the roads be like at 8 a.m.?

Anyway, after buying our passes to the Starline Tour’s Hop On Hop Off Doubledecker Bus City Tour, we spotted commotion outside the Graumann’s Chinese Theater where the Starline Tour’s City Tour bus drops off and picks up. Trucks were bringing in panels and walls and barricades. I could see the name of a movie on one of the screens. Workers were setting up for the movie premiere of 30 Minutes or Less with Jesse Eisenberg.

I couldn’t believe my luck. Me? A Hollywood lover. A celebrity watcher. A TMZ sneak peeker. I might actually get the chance to watch celebrities arrive for the movie premiere. This was extremely Squee-a-licious to me!

Anyway, we headed on our Hop On Hop Off City Tour. We purchased the 24-Hour tickets since we knew that we would not be back the next day. A 48-Hour Hop On Hop Off City Tour is also available. We saw Beverly Hills, La Brea Tar Pits, the Kodak Theater, Rodeo Drive, Melrose, Hollywood Forever Cemetery, and a couple of brief glimpses of the Hollywood sign. The Hollywood sign is hard to see as tour buses cannot get close, plus the sign was shrouded in mist the day we visited.

Upon returning to Graumann’s Chinese Theater, a small group of people were lined up behind a barrier on the opposite side of Hollywood Boulevard. I made my way to the barrier — I was in the second row. My family were tired from a long day, but I insisted that we wait. And wait we did even though the kids were a little whiny and the husband was definitely not as starstruck as I am.

2.5 hours later the first limos arrived. Exciting! The limos…actually black SUVs…were not for one celebrity, but instead were crammed with 4 or 5. Is this a green measure? I’m not sure, but the celebrities were not recognizable to me at all. My teen, on the other hand, spotted a guy from one of her TV shows…I don’t recall the name of the show or the guy. What kind of a celeb watcher am I anyway? My tween spotted Joe Jonas. We all spotted one of the Kardashians…Kim, I think?…I’m not sure, but it was a young woman with jet black hair.

In the sea of celebs we didn’t know, we spotted one of the costars. He bounded out of the limo, raced across the road, and ran past the crowd shaking hands. I have to tell you that it was quite an exciting event even though I didn’t know who the guy was. Just being on Hollywood Boulevard, standing in front of the Graumann’s Chinese Theater all during a movie premiere was a special, unexpected moment of celebrity in the city built on movies and stars.

I did some digging and found that Alexa Vega was at the premiere as was Fred Ward. Vega was in all three Spy Kids movies as well as the new Spy Kids 4 flick. All exciting, but nothing compared to the last star we saw bound out of a limo and cross the road… 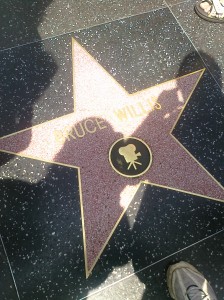 Ben Stiller! That’s right Ben Stiller was there at the premiere. I didn’t know that he was the producer of 30 Minutes or Less. We love him in the Night at the Museum films. I took the most awful Flip video of blurry crowd and then completely missed filming Stiller as he passed where I was standing. I won’t be asked to film an event any time soon that is for sure. Oh well, my husband got a nice shot of Ben, which I will post once I gather all my SD cards and flashdrives and photos from my old phone to collate my pics.

Oh, and I almost forgot a funny moment. As I waited in the crowd it was hard not to eavesdrop on people’s conversations. I overheard a young mom who was standing with her kids and what looked like her mom talk about a blogging conference in San Diego. I couldn’t stop myself from letting her know that I was a blogger who was also at the conference. We exchanged cards. Found out that she just moved to LA from where I live and her mom lives close by me still. Small world, isn’t it?

I was given a complimentary ticket for the Starline Tours Hop On Hop Off City Doubledecker Bus City Tour. We purchased the other 4 passes for my kids and husband using a $5 off code my husband found on the internet. The views expressed in this post are my own. I blog following the tenets of Blog With Integrity. Some of the links in this post are to my amazon affiliate account.

← Day One Musings from Me Trip to Southern California: #BlogHer11 and @SeaWorld
@Kneebouncers: Free Games for Toddlers [Giveaway] →