It’s time to put on makeup.

It’s time to light the lights.

It’s time to get things started.

Why don’t we get things started.

In the most sensational, inspirational…

The song lyrics above signaled the beginning of a very special time for my family. As you know, family time is special to me. With a Kid, a Preteen, and a Teen, time seems to be slipping through my family hourglass at a rate too rapid to measure.

We were invited to a screening of the new 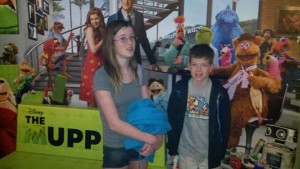 Muppets Movie this past weekend. And I won’t hesitate to say that a “fun time was had by all!” My husband and I grew up watching The Muppet Show — he watched in the U.S. and I watched in the U.K.

The movie’s opening theme song signaled that a fun time was ahead for me and my family (the teen was home sick). In fact, my husband and I are such diehard Muppet fans that we were there at the opening night of The Muppet Christmas Carol…even though we did not have children back in ’92. We loved it and The Muppet Christmas Carol is part of our family’s holiday viewing traditions.

A short synopsis of the film directed by James Bobin…

To stage a telethon and raise the $10 million needed to save the theater, Walter, Mary, and Gary help Kermit reunite the Muppets, who have all gone their separate ways: Fozzie now performs with a Reno casino tribute band called the Moopets, Miss Piggy is a plus-size fashion editor at Vogue Paris, Animal is in a Santa Barbara clinic for anger management, and Gonzo is a high-powered plumbing magnate. With signature celebrity cameos, Disney’s “The Muppets” opened Nov. 23, 2011.

I was invited to attend a screening of The Muppets Movie with my family. The views expressed in this post are my own. I follow the tenets of Blog With Integrity.

← It Is #BlackFriday Isn’t It?!
Holiday Gift Guide: Keeping Up with Kids, Work, Home with HTC Rhyme →