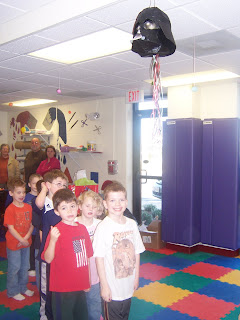 My son turned 6 last weekend. He chose a Star Wars themed party. He was very, very, and did I say, very specific about what he wanted for his birthday party.
Let’s just say we had a lively discussion about why I wasn’t hosting 12 6-year-old boys in our home. He was convinced that we should have light saber battles near the new VIZIO flat screen TV, bash a pinata in the livingroom, and generally wreak havoc throughout my house. Let’s just say the whole mess ended in one of us having a huge tantrum at the checkout desk of the health club as I booked a Fit-n-Fun party for him. Hint: It wasn’t me.
As the party date approached he became resigned to having the party at the health club. To the health club’s credit, their parties are fun with a play session in the gym, followed by a romp in the “Tumble Room,” followed by cake, followed by Mommy collapsed in a heap at home…but at least her house is not half-destroyed by tiny Anakins and tiny Clone troopers marauding around her Noritake china and Irish cut glass lamps!
The party favors were found at my all-time favorite store for bargains…Walmart! Back in December I found Cars watches in plastic balls for about $2. I purchased 12 of them in anticipation of my son’s 6th birthday.

Here’s one of the watches: 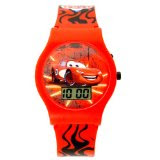 My son was thrilled. It’s not often that you can put an item in the birthday goodie bag that is not junk. This watch was a hit! Now if only Walmart had sold Star Wars party items…