My son is all boy. I don’t know why this surprises me so much. Except that he has two older sisters. With his sisters I was extremely careful not to say that a toy was a boy toy or girl toy. I called all of the toys…toys. I bought dolls, play food and a kitchen, doll strollers, action figures, animal playsets, and cars. I wanted the girls to have access to all kinds of toys. We were in playgroups with boys so it made sense to have cars, trucks, and trains on hand for when we were the hosts. My daughters played with all their toys, but of course the Princess costumes, play kitchen, Barbies, and dolls were their most cherished possessions. Again I wasn’t surprised by this development. 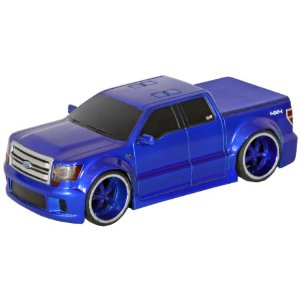 When my son was born, he had at his disposal an entire playroom of toys. Trains, planes, and automobiles. Dolls, strollers, and high chairs. Educational busy box toys. Puzzles, games, and musical toys.

Once he was let loose in the playroom to play, you won’t be surprised to hear  that he crawled to play with the cars and trucks. No amount of coaxing could tempt him to play with a doll. He liked the play kitchen but only if his sisters played with him. But when it came to cars he was a boy with a mission to play.

And so gradually the dolls, strollers, and even the toy kitchen were stowed away to make room for not one but two train sets and a couple of road tracks. He was a little guy who was able to build elaborate roads and ramps out of boxes and probably a doll…poor doll!

My son test drove a couple of cars recently. It was a “hardship” review assignment for him…not. He loved every minute of playing with the DUB Garage cars we were sent to review. The vehicles are motorized. The Custom Ridez truck came equipped with DUB custom designs, pulsating music, and lights and sounds. The Custom Ridez is not a remote controlled car per se, but you can program the car to drive using a button on the top of the vehicle. You can also customize the music, lights, and sound effects.

My son had a great time navigating the Custom Ridez around the many obstacles in our kitchen. We not an “everything is in its place” type of family so he had a couple of boxes and bags and chairs to negotiate his way around.

The Custom Ridez is available in Dodge Charger (which is what he played with), Chevrolet Corvette DUB Custom, Ford F-150, and Ford Mustang 5.0. The car required 3 AA batteries, which were included. Don’t you love when you don’t have to go running out to the store for batteries? At $9.99 the Custom Rides is the perfect price point for a birthday or holiday gift. You can purchase these cars from amazon. 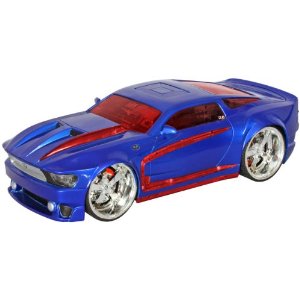 The second car he test drove was the DUB Garage Blazerz…a sporty vehicle. He controlled the car by playing with the buttons on top of the car. He could make the car do a dazzling light show too.

The car comes with 3 AA batteries. You can choose from DUB Edition DH5 Sports Car or DUB Edition DI7 Muscle Car. The DUB Garage Blazerz Muscle Car can be purchased from amazon for $24.99.

What I like about Toy State’s line of toy cars is that your child can grow from one range of cars to another.

Get the scoop on Toy State…

I was sent two Toy State vehicles to facilitate my review. The views expressed in this post are my own. The affiliate links within this post are to my amazon account. I follow the tenets of Blog With Integrity.

← I Can See the Numbers on the Coffee Pot!
A Trip to Canada for Book Lovers! →