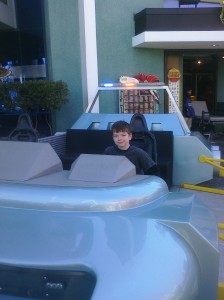 Hovering around at Universal Studios Orlando

Have you ever thought “Phew! At least nothing else can go wrong!”…and then it does?

A few years ago, my family and I took a much anticipated vacation to my homeland. I had wanted to explore England with my children. I wanted to wait til all three of my children were old enough to enjoy the trip. The summer my son was 6 and my daughters were 10 and 12 became the perfect time to go.

My husband our resident trip planner left no stone unturned in planning for our trip. He researched. He searched. He weighed travel options. He found the best airline deals. He coordinated hotels. He mapped out London Underground routes. He booked tickets to tourist attractions. He planned as much as he could before we left America…even the rental cars. He planned our trip with stops in London, Manchester, and Stratford.

You can plan for everything…but you can’t plan for EVERYTHING, if you know what I mean. After a whirlwind 5 days exploring London, we packed up and motored to the north of England to spend a few days with my family. Sounds like a good plan, right? Except that not everything goes as planned.

After sitting at well-known international car rental place (rhymes with Berts) for over an hour, we started getting antsy. We noticed that the only people who left in a rental car was the older couple who drove off in a teeny subcompact car just as we arrived at the rental car place.  For one hour, not another person left in a rental car. Plenty of people stormed out. A few people tried to engage the very disengaged staff, but those staff were always on the phone. We were traveling with my dad a long-time user of this particular rental car company. He sought answers and wouldn’t leave the front desk until he got answers.

I wanted to yell “MY KINGDOM FOR A RENTAL CAR!” Very loudly. I wouldn’t have yelled…not my style…but I wanted to YELL OUT LOUD on social media. Ah, venting on Twitter about my rotten experience would have made me feel SO much better. But…sniff…I…didn’t…have…enough…minutes…on…my…cell…phone. Ack. It was 2009 and I did not have a smart phone back then, neither did my husband. So that we had some way to communicate when separated, my husband bought two prepaid cellphones with 10 minutes loaded on each phone. If you hadn’t guessed 10 minutes is NOT a long time. I used up two minutes calling my dad.

I stood at the well-known rental car company counter and felt powerless. My prepaid phone was as useful as a paper weight. I wanted hurl my useless phone at the heads of the workers who were cowering behind the counter holding phones to their ears but obviously not talking on the phones. Cowards…every last one of them. Powerless. My dad, my husband, and I all agreed that the only option was to leave the rental car place by taxi, go to the train station, and take a train to Manchester. So that’s what we did.

We loaded all those bags on to the train at London Euston in silence. The kids were puzzled that we weren’t driving to my hometown, but they were excited about taking the train. The adults were silent. We didn’t speak to each other. We were SO angry at the well-known international car rental company. Seething with anger. Furious that we had booked rental cars MONTHS in advance only to find that this company let us down in a big way. We were unable to vent on the phone to the well-known international car rental company. Unable to tweet or Facebook. Unable to do anything except sit quietly on a train to my hometown surrounded by family and 13 pieces of luggage. If there is a more powerless feeling, I have yet to experience it.

As I sat on the train, I thought about how much are trip would be affected. Taking the train to Manchester would mean that we would not have rental cars while we were visiting friends and family. Without rental cars we had to take two taxis everywhere we went or we had to hop on two or three buses. What a nightmare!

I will NEVER rent from well-known international rental company ever again. Let me down once and you are done. Ruin my much-anticipated and highly planned vacation and I will never book your cars again. That’s a promise.

Post script…There is an upside to this story…we had a great trip to England with our kids and their grandparents! Read about my family’s trip to England.

Being Sick on VacationOur last two days of vacation in England a few years ago were like that. One kid was sick on the second to last day when we had to take a train. My son was sick the night before our flight home. I felt sick in the security line but decided if I could make it on board I would be OK. I told my family that none of us were allowed to eat until we boarded the flight! I kept thinking security would take one look at me and tell me I couldn’t board. It was awful.