Up. The kids and the grownups wanted to follow our tradition of watching a movie on Xmas day.  We have tried letting the kids watch downstairs while we watch upstairs, but it doesn’t work. A kid or two drift upstairs at exactly the point where a character uses a swear word or someone gets shot in the adult movie. So you can see why watching one movie works for all of us. Until Up…

The cast of characters…no, not in the movie…in my family room:

– Musings from Me AKA The Fun Police

– Kid who would rather play DS than watch the movie.

– Preteen who is wearing slippers from Santa, leggings, t-shirt, skort, and wrapped in sheepskin blanket — faux sheepskin she wants to point out.

– Teen 13 going on 30 who drifts in and out but then stays as long as she gets to share the faux sheepskin blanket with her sister, plus the chair the preteen is sitting on.

– Grandad — who uncannily like the guy in Up only not a nonagenarian.

– Grandma — who drifts in and out of the room.

– My sister, her husband, and their two girls…my two nieces have seen the film.

The film begins and well, it seems a little sad and quirky. Not to give too much away but the man and his wife suffer a tragedy which changes the path of their live. It is at the point where the man’s wife is taken to the hospital that I start wondering ahout my dad. He is not known for dealing well with films about sickness, death, and old people. He is much happier with screaming car chases and violence. 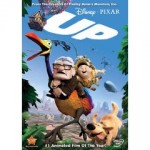 The film gets funnier once the Up adventure happens, but drifts back to sad moments and poignant thoughts. Russell — the Wilderness Scout — is hilarious in a little kid cute “I will say anything to anyone kkind of way.”

Hard to think that this is a Disney film. Up

seems so sad and tragic. But, we got through it. No one loved it, but no one hated it either.

Musings from Me rating: A thumb in the middle rating??