If you walked around my home, you would think I was moving. I have boxes in my living room. Piles of clothes on couches, chairs, and the floor. Books are stacked everywhere. No, I’m not moving. I’m just in major purge mode.
There is a 4-year gap between my middle and youngest child. My middle child is a girl and so is my oldest. By the time my youngest — a boy — was born, my home was overflowing with girlie stuff…doll strollers, baby dolls, dress-up dresses and shoes, feather boas, and more. Because I had two girls, I had two of many items. There was hardly room to walk around in the playroom, family room, or their bedrooms. When my youngest started moving around I had to take stock of the overabundance of toys. Thought my infant son didn’t yet have many toys of his own, there was no room for the toys he had. I had my eye on a couple of large toys…a Thomas train table, a BBQ grill play kitchen, a road map car rug, and a GeoTrax train set. Each of these toys required space that wasn’t available. 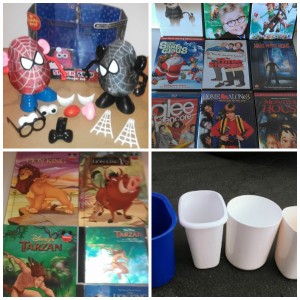 I set about purging and decluttering all the toys, games, and books that the kids no longer needed. I even gave my task a name…The Great Toy Decluttering! Armed with boxes, plastic tubs, and garbage, I was ready for the task. Little did I know that TEN years later I would STILL be sorting, sifting, and purging our stuff!
Basically we have way too much stuff. My kids are the only grandchildren on my husband’s side of the family. Lots of spoiling going on! There are only five grandchildren on my side of the family, too. These kids have everything they want and then some.
Another issue is that we have never moved. I moved a lot as a kid…I was basically a nomad! My kids were brought home from the hospital to the same house that they will live in when they graduate high school, and probably college. I made a pact with myself to NEVER move homes while the kids were growing up. I’m happy living where I am EXCEPT for the space…or lack thereof.
Purging our clutter has become a necessity. Every month or two, I go in to major decluttering mode. Once I have amassed a stack of bags, I find a “home” for our no-longer wanted stuff. I consign the better quality, in very good condition stuff at my local consignment ship. The rest is donated. I usually donate to the organizations that pick up stuff at the end of my driveway or I bring my everything to Goodwill.
Do you donate to Goodwill? Do you shop at Goodwill like I do? I’ll bet, like me, you hadn’t made the connection that STUFF donated leads to JOBS. Here’s some more facts about Goodwill that you might not know:

Check out the new PSA (Public Service Announcement) from Goodwill:

Disclosure: I was not compensated to write this post.

← Is There a Time When Ice Cream Doesn’t Hit the Spot? #seizingfamilytime
Back to School: Taming the Homework Beast →