The other day I shared with the kids that I had once taken Spanish in school. My daughter was interested as she takes Spanish. My husband was astounded. Apparently I had never mentioned this before. Uh…I am sure I have told him that I briefly took Spanish in middle school. I dropped it after a year as I was also taking French.

You see I attended a school that recommended everyone take two languages. I started French later than my classmates as I joined 6th grade midway through the year. My classmates all started French at the beginning of 6th grade. The following year all of us picked up a second language. We had the choice of starting German, Latin, or Spanish in 7th grade. I opted for Spanish, as I was told it was an easier language to learn that German or Latin. But really I barely had a grasp on French. After a few months I knew I was out of my depth managing two new languages. I dropped Spanish and focused entirely on French, which was one of the best decisions of my middle school and high school. 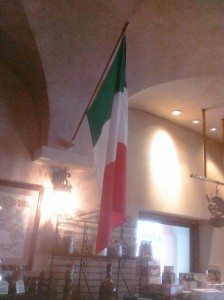 We spotted this Italian flag at the Loews Portofino Bay Hotel at Universal Studios, Orlando

I had hoped that my children would have an earlier start with languages than I did. I wanted my children to be better prepared for languages than I was as research shows that children who are exposed to languages earlier are more adept at languages than their counterparts who take languages later. While my children watched the occasional video in Spanish and I read them books about countries outside the U.S., my local area did not have the early childhood language opportunities that I wanted.

I’m pleased to report that my local area — Washington, D.C. — now has a place where parents can give their children exposure to languages. The past two weeks, Language Stars, held Open Houses in their D.C. Metro and Chicago Metro locations, so that parents could learn more about the programs offered.

What is Language Stars?

Language Stars offers play-based, full-immersion foreign language classes that open children’s minds to new worlds. Toddlers, preschoolers, and K-5th graders benefit from an early start, during a unique window of opportunity when their young brains absorb the magic of another language and culture easily and rapidly. A foreign language puts the world in your child’s backyard, bringing other cultures to life. The following languages are offered at Language Stars: Spanish, Mandarin, French, German, and Italian (check Language Stars locations for specifics).

Where can you find a Language Stars?

Language Stars centers are located in the Chicago Metro area and D.C. Metro area. Centers in Chicago include:

Anyone local to me, can find a Language Stars in the following Washington, D.C., locations:

What are the benefits of enrolling your child in Language Stars?

At Language Stars, you will find engaging, native-speaking teachers recruited from more than 20 countries around the world. The Language Stars teachers immerse children 100% in a foreign language through an engaging mix of games, songs, arts and crafts, treasure hunts, and more.

The Language Stars teachers are guided by a curriculum developed by a team of educators, linguists, and early childhood experts. Language Stars focus on a young child’s “Window of Opportunity” to absorb a foreign language naturally, and tracks the progress of each child. Can I tell you how much I would have loved to enroll one of my little ones at Language Stars? What a wonderful opportunity to expose a young child to a new language and culture!

What classes are available at Language Stars?

Programs are divided into the following classes:

Want to find out more about Language Stars?