Being mistaken for an older kid can be onerous. Especially if your 3-year-old is acting like…well…a 3-year-old and not say like a 5-year-old. I got used to the looks of concern. There is a one bright spot to having a taller-than-average kid. Your child is tall enough to ride rides at Disney! That’s right my 3-year-old was about 40 inches tall when we visited Walt Disney World. I was surprised to learn that he was able to ride Soarin’ at EPCOT. I was amazed that I was able to take him on this ride. I thought that I would have to do the Rider Swap, which is when one parent rides a ride while the other parent stays back with the young child. He rode that ride like a seasoned veteran of amusement park rides. Warning To Those Who Like to Stay Dry: You will get wet on Grizzly River Run! We couldn’t persuade the older two to come along for this adventure, but our youngest was game. Did I mention we got wet? A poncho would have been a good idea. Except that my son probably wouldn’t have worn one.

Musings from Me advice: Go on Grizzly River Run early in the day. We climbed aboard as soon as we arrived at California Adventure. We were able to ride twice. It was August so we all dried off quickly.

Grizzly River Run and Soarin’ Over California are in the Golden State Area of the park. Another attraction in this area is the Walt Disney Imagineering Blue Sky Cellar. You can get a preview of soon-to-be-opened attractions, while also perusing plans and blueprints for existing attractions. If I had any artistic skill at all, I would train to be an architect. The attractions at all Disney parks are designed to give the visitor the best possible experience. Nothing is left to chance. Why even Spaceship Earth is designed with channels and special gutters to allow rain not to fall on visitors. Disney Imagineers think of everything! Thanks to FASTPASS we rode Soarin’ Over California twice, maybe three times. You feel as though you are literally handgliding over California. The kids were anxious to do as many rides as possible at California Adventure as it was our last day of vacation in Southern California. I couldn’t blame them for wanting to do as much as possible, but I wanted to see Blue Sky Cellar.

Once we were inside Blue Sky Cellar the kids were intrigued by the designs for new and old rides. Of special interest to us was the soon-to-be-opened Cars Land. Scheduled to open in 2012, Cars Land will feature the sleepy town of Radiator Springs off Route 66. Rides in Cars Land will include:

The 6-acre Cars Land will be the largest attraction at Disneyland Resort. You can even dine at the Cozy Cone Motel, Flo;s V8 Cafe, and Fillmore’s Taste-in! I wonder if there will be a statue to Stanley! 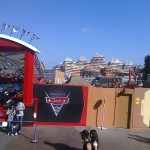 While my son had his pic taken with Lightning and mater, I took a peak over the wall surrounding the construction site for Cars Land. It looks very fun!! I can’t wait til it opens!

We ended our day with several visits to California Adventure stores so my Preteen-now-Teen could swap her Vinylmations. She started a collection of these quirky and oh-so cute figurines about a year before our trip. Each one has the body of Mickey Mouse but each is decorated to resemble the characters from Toy story, the Muppets, Disney villains, or other more off-the-wall creations. One of hers is a Mickey decorated to look like a S’more.

We ate a very delicious dinner from two walk-up, quick service places: Boardwalk Pizza & Pasta and Paradise Garden Grill. My son and I are the more adventurous eaters…we loved the Mediterranean dishes from the Paradise Garden Grill. After dinner, it was a final ride on Goofy’s Sky School before heading to World of Color to use the FASTPASS that we picked up at Grizzly River Run at the start of our day.

← Holiday Gift Guide: Can You Solve the Rubik’s Cube? [Giveaway]
Target…Oh, How I Love You. →