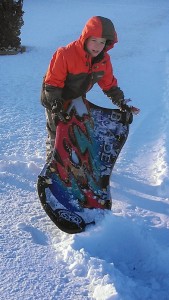 Two weeks before Christmas, the kids had 2 snow days. Last week we also had 2 snow days plus MLK Day. Snow days have always been a family affair around here. My husband is a former-English-teacher-now-school-administrator. He’s always had the same snow days as the kids. Occasionally, his county will declare a snow day while the kids’ school districts will have only a delayed opening. You would think that the weather wouldn’t be that dramatically different across counties, but it often is. Now that he is an administrator, he often has to report to school for part of a day…but sometimes he can work from home.

Even before the kids were in school, a snow day meant staying in PJs, watching more TV than usual, and drinking lots and lots of hot chocolate. Not much has changed!

My husband learned to drive around here so is used to driving in adverse weather conditions. I learned to drive in the U.S., but grew up in England…the land of no snowfall whatsoever. I recall one snowfall of about 1/2 inch when I was about 12. And yes, we scraped together snow and had a snow ball fight…snow pellet fight? There are a bunch of great sledding hills a very short drive from my house, but since we choose not to drive we sled on an open space in our neighborhood. My daughters have decided that walking to the sledding hill is just not worth the trouble. My son on the other hand loves to go. He could walk there by himself but I like to go with him. Last week, I did a bit of sledding with him. Although the snow was so powdery that my sled sank in to the snow. Me and my sled weren’t going anywhere. My son got a bit further down the hill on his sled. 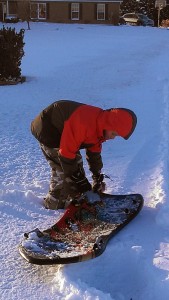 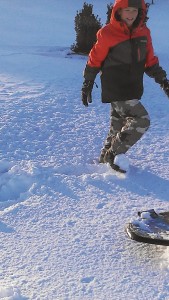 What do you do for fun on a snow day?

← Introducing… The Wizarding World of Harry Potter–Diagon Alley!
Drink coffee like the Scandinavians do →