Day #1 was all about watching the snow fall and fall and fall. Late afternoon we ventured out to dig our way out. Blinding sunlight. So glad we all had our ski goggles. Kids played. I shovelled, Husband snow blowed.

Day #2 was all about waiting for Mr. Plow.

Editor’s note: I had this post written when wham it was lost. All I have left is the above text. Bleh! But, onward to rewrite the post…

We shovelled and dug and used the snow blower. I forced the kids to help. Day #1 was all play, but Day #2 was all work.

I may have started singing “It’s the Most Wonderful Time of the Year” when the plow came…well…plowing down the road. Because of course the appearance of the plow means we are that much closer to school opening. On Sunday we had missed 0 days of school. I knew we were looking at at least 2 days off school with the predicted snowfall. Little did I know… 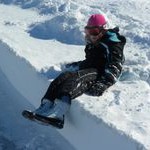 The tween sitting on the wall created by the snow blower. 22 inches!

Day #3 First day off school. Kids played in the snow. Movies were watched. wii was played. Screens of all kinds were argued over. Books and toys and drums and keyboards were used. Snacks were eaten. Hot chocolate slurped. Baileys guzzled.

Day #4 In anticipation of #snOMG, I filled the bathtub once again. No power = no well = no water = no toilet. We can last about 24 hours in a house  without power and water. The projected snowfall made leaving the house unlikely and dangerous.

We did venture out to pickup a prescription, go to a doctor’s appointment while some of us went to Costco for provisions and samples.

Day #5 White out. No visibility at times. When I could see out all I saw was horizontal snow. Scary to be so trapped by snow. Too windy to venture outside. Staying put was our answer.

Day #6 of our snowbound experience we ventured out to play…shovel…play. The driveway was covered in another foot plus of snow. Our road had been plowed but massive amounts of snow had accumulated just in front of our house making driving up or down the road impossible.

3 more days of off school… Will we survive. Stay tuned!

← Wordless Wednesday: #snOMG
Make a Break for It: Snowbound in D.C. →