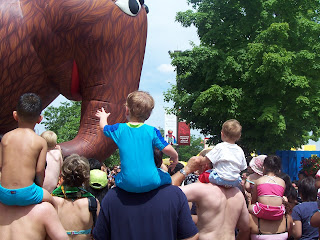 My son reaching for Snuffy in the Sesame Street parade at Sesame Place. He loved, loved, loved everything.

We live between Baltimore and D.C. Driving to PA for the day is a very doable day trip. It makes for a looonggg day, but hey, that is why we have a DVD player in the van! Over the years we have visited Dutch Wonderland, Hershey Park, Sesame Place, Strasburg Railroad, to name a few.

Years ago I worked from home and my husband as a teacher had the summers off. I look back on those summers with fondness. With time off over the summer, we had the freedom to go on a day trip each week. Now that we are kids are older, our summers are jam-packed with swim team, summer workbooks, and summer camps, which makes scheduling any day trip challenging.

We love Dutch Wonderland! I took my first child when she was 18 months old. She loved everything except the train–too noisy. Back in the late 90s, DW was a lovely, oldie worldie, family-run park. Once it was bought by Hershey Park it lost some of its sparkle for me. The admission prices zoomed up as well. If you want to see what some of the rides used to look like, there is a “ride graveyard” near the lagoon. Last time we went we had fun taking photos in the old train, swan cars.

Sesame Place is a Disney-style water park for the 7 and under set. Located in Langhorne, PA, Sesame Place has everything that a true Sesame Street fan would want: costumed characters, water rides, land-based rides, shows, and a parade down Sesame Street. Both of my daughters were in the parade the last time we were there, on the Elmo float. I’m not a big fan of walking around in my swim suit, but the lazy river and water slides are so much fun that you forget what you are wearing. Well, O.K. you don’t forget, but it is doable for a day.

Last fall when my son was 4 we headed to StrasburgRailway in Strasburg, PA. I did not want to miss the Thomas the Tank Engine traveling show. The show comes to a location closer to us, but the B&O Railroad Museum is in such a rough, unsafe part of Baltimore…is there any other part…that we decided to check out Strasburg. I am so glad we did as the train ride is through lush countryside and working farms.

My son saw Thomas at Strasburg, had his photo taken with Sir Topham Hat and Thomas, rode on a hand-cranked train, rode on the Thomas train, and got a Thomas shirt. He was a happy boy the entire day. We did not take our daughters as I knew neither would be interested at 9 and 11 years old.

Other places to visit: Hershey Park, the Crayola Crayon Factory, and the Herr’s Potato Chip Factory, the Wolfgang Candy Factory, to name a few of the many Pennsylvania attractions.