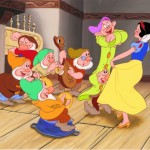 . With a kid, a preteen, and a teen, we have a hard time finding time to sit down as a family and watch a movie. We’re always running to volleyball to flu shots to school or to bed.

! I was interested to see my preteen and teen’s reaction to the movie.

Would both think it was too babyish? Would the teen kick up a fuss and want to watch something else? Would my 6-year-old think the movie was too girly/princessy? I want our family to watch a movie together, but it helps to find a movie that all of us like. Snow White was an excellent choice for our family movie night!

Here’s what the Musings from Me family loved:

– The switch to HD has enhanced the graphics. The colors are crisp and pop out — an improvement from the Platinum Edition DVD that we own.

– The storyline is complex enough to keep the older ones occupied while the younger one was entertained.

– My teen was a little grossed out at the part where the dwarfs decide to keep Snow White in a glass coffin. I shushed her!

– The preteen was worried she would be scared by Snow White — she was tiny the last time we watched and did get freaked out by the witch.

– The kid loved the entire film — animals, Snow White, and all.

– We all got a kick out of the cleaning scene. My son was howling about the deer licking the plate. I want the squirrel to dust my house using his tail.

All in all a huge thumbs up for this movie from our family!

Thank you to One2OneNetwork for giving me this film for review.

← National Tween Summit
My Swiffer Was Not Up to the Job →