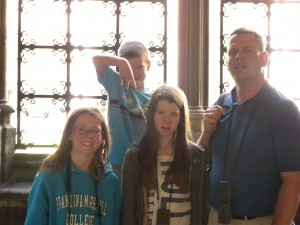 The kids and Dad at the Cloisters in Westminster Abbey. The 6-year-old is saying "Majide" from "I Survived a Japanese Game Show!"

It is not often that my husband and oldest daughter go out together. She has her volleyball and he has his work schedule. When I go out my husband will make dinner and set up the Looney Tunes – Golden Collection, Volume Three

or one of the other Looney Tunes DVDs. The teen, her preteen sister, and kid brother have a great time with dad.

My husband rarely gets to take one of the children out anywhere special — I’m not counting when my husband takes one of the kids to practice or to a school event. No, I’m talking about a special “Dad and Daughter or Son outing.”

This weekend my preteen had a friend over and the kid had a birthday party, which meant that the teen and Dad were at a loose end. I suggested that both go to M&S_Grill since I had a gift card burning a hole in my pocket. I had been given the gift card as part of the Reel-to-Reel promotion that McCormick & Schmick’s restaurant is hosting.

My teen and her dad tried out M&S Grill since they were going out at lunchtime. The M&S Grill was located at the Baltimore Inner Harbor — they did some people watching while they ate.

The food was “delish” per the teen – she went to town on a huge bowl of crab soup and part of the Pot Roast Nachos — she has a small appetite and an adult entree is still too much for her. My husband said that he and the teen couldn’t finish the plate of Pot Roast Nachos, but that it was so good! He had the crab cake sliders, which he absolutely loved.

The lunch out was a success — good food plus Dad and Daughter time!

For a chance to win a $25 gift card from McCormick & Schmick’s — which can be used at the M&S restaurants or the M&S Grill —  leave one comment per entry:

–  Tell me your favorite dinner entree.

– Subscribe to this blog in a reader — see right sidebar.

– Enter to win a trip to Sundance at M&S.

When you eat at M&S and you buy a dinner entree you can purchase a $5 movie ticket. In addition, one lucky fan will have the opportunity to experience movie magic firsthand with the McCormick & Schmick’s Reel to Reel sweepstakes, which will roll out the red carpet at the 2010 Sundance Film Festival. The Sweepstake’s prize includes airfare and hotel for two to Park City, Utah, and VIP passes to party with the stars at Sundance. Movie fans can register to win in any participating McCormick & Schmick’s Seafood Restaurant or online at www.mccormickandschmicks.com/reeltoreel

This contest is open to U.S. residents only. Giveaway ends on August 31 at 11:59 p.m. I was sent a gift card, but I was not paid to do a positive review. I posted because the meal was delish!