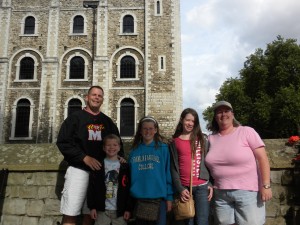 The Tower of London

Some of you may be surprised that I am British. I mention my British-ness here and there. A memory. An anecdote. A tale of my childhood. Probably most obvious when I meet someone. I always hear “You have the faintest smidge of an accent.” While for the most part I blog as an American living in well…America, I spent much of my childhood in the United Kingdom.

I was born in Manchester…Withington to be precise. While I am from a middle class family, my parents were both from working class families. Both Manchester born and bred…Mancunians to be precise. My maternal grandfather worked on the railways, while my paternal grandfather was an engineer and a Mason. Both of my parents weren’t content with what they had in England, so looked for way to better themselves. At least for a short while, we moved to the U.S….Edison, New Jersey, before returning to the U.K., then rebounding back to the U.S., and finally settling in Wilmslow, Cheshire for good.

A few years ago, I heard all about Downton Abbey. Once I heard that it was a Masterpiece Theater production, I knew the series would be a good one. But, why didn’t I watch? I’m not sure exactly, but probably the fact that I don’t watch primetime TV series and spend the bulk of my time watching reality TV or stuff stacked on my DVR. But, you know what I’m fed up with reality TV> Hoarders is depressing with home situations so dire that you wonder if the people can be truly helped. Intervention makes me angry at how selfish the addicts are and how enabling the families are to the addict. Top Chef, Food Network Star, Chopped, and even old favorites, Food Unwrapped and Diners, Drive ins, and Dives are losing their appeal for me. You might have read my posts about NOT cooking, but I’m fascinated by cooking shows. Strange isn’t it? I get picky though and only want Alex Gharnaschelli(sp?) to be one of the judges on Chopped or I don’t like the challenge on Top Chef so I switch off. Basically, I’ve reached my limit with reality TV.

I needed a change… Since I watch movies when I work I have the movie thing covered as we have many, many DVDs. I got the urge to revisit the drama genre. Years and years ago I was a devotee of Judging Amy. And before that it was ER, and later 24. As I scrolled through Netflix, I wanted to find a show to watch. I settled on Scandal and quickly watched all 7 episodes…eighth episode is not on Netflix, so I had to find something else to watch. Tried American Horror Story but the creepy, spine tingling factor was so off the charts that not even Jessica Lange could hold my attention.

Last night was the Downton Abbey third season premiere. I plunged in head first after missing the first 10 minutes. Since I didn’t know any of the characters, I was a tad confused with names. What was the name of the footman? Was O’Brien the housekeeper? And which one was Mary? I plowed through the first episode of the third season and more or less got the gist of what the show is about.

I made one of those decisions that I am DEEPLY regretting as I write this post…I stayed up to watch the first two episodes of the first season. While my eyes may be held up by toothpicks, but I am so glad that I stayed up as now I have more than a working knowledge of the cast and characters of Downton Abbey. I now know why there is animosity between Mary and Edith. I love Maggie Smith is ANYTHING so she was a real treat as the “could care less what anything thinks English aristocrat.” I wasn’t sure who Matthew was and how he fit and now I do. Of course I have no clue who Lavinia (mentioned in Season 3, Episode 1, but not mentioned at all in Season 1, Episode 1 or 2) is. I’m not at all sure how Matthew is involved with the will of “Reggie.” Is Reggie the husband of the American grandmother of the girls? Someone on Twitter said No, but now I wonder if this is true. And Reggie is Lavinia’s father. Is Matthew still the heir to the Downton Abbey title? I must watch more episodes to find out! 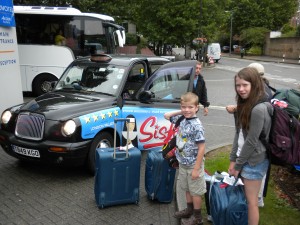 What do you do when you arrive in London? Hail a London cabbie of course!

Do you watch Downton Abbey? Isn’t O’Brien a witch? Thomas is a tad evil too. The below the stairs crew remind me of the Gosford Park staff. And my beloved Maggie Smith was in both, so I am officially in love with her portrayal of the English upperclass.

← New from Disney: Oz The Great and Powerful and Road to Emerald City Sweepstakes #DisneyOz
DealDash.com: An Online Auction House with No Membership or Shipping Fees →

4 comments for “Musings on Downton Abbey from a Brit”