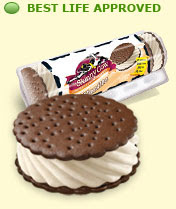 Skinny Cow is a fixture in our freezer. Not that it lasts. It’s a fixture for a brief moment until someone discovers the box and wham…the Skinny Cow ice cream sandwiches are gone. I know who the major culprit is…you know how those oldest children are…not that I’m naming names.

But getting back to the ice cream sandwiches — delicious. At 140 calories per sandwich…Skinny Cows makes a great snack. Mmmmmmm

What? What were we talking about? Sorry I was in a Skinny Cow haze. They are just so yummo. Oops… *wiping ice cream of the keys*

I’ve been eating them for the last year or two. So you can imagine how wide my eyes got as I read a tweet about Skinny Cows one Friday. As fast as you could say “Hand me a Skinny Cow” I had responded to a tweet for a chance to hold a drawing in my twitter stream.

Once I tweeted about the Skinny Cow to my twitter followers, I got two responses immediately. One was from @RobertDraper — do you know who he is? — who said he “loved ice cream.” He’s the son of Don Draper on Mad Men. Still not clear…all the characters from Mad Men have twitter accounts. During the season the characters would tweet about issues from the show. I had a hilarious convo with @bettydraper about ironing and starch.

So a fictional character from a TV show was trying to win ice cream. Hmmm. I know I don’t get it either. In any event my tweet back to him asked him to ask his mother to let me know if it was O.K. for him to win ice cream. I never heard back from him. I chuckled at the thought of some young intern “playing” @RobertDraper — must be a fun job.

I did hear from @annieblogs — I hope she enjoys her Skinny Cow ice cream sandwiches as much as we do! If you don’t believe me on the tastiness of the Skinny Cows, check out http://www.skinnycow.com/ Thanks to you Ketchum for the coupons!