I couldn’t keep up with my family. They were walking normally. Not going a mile a minute. Just walking at a brisk pace. I was a slow poke. We were at one of the stops on a double decker bus tour of Philadelphia. I was lagging way behind my husband and three children. They were eager to get to the next historic monument. I was, too, but my knee had other ideas. Something in my knee did not feel right. There was a sore spot on the inside of my left knee cap. I was hobbling after walking only a few blocks. In fact, I got a bit angry with my family for walking ahead of me. I even accused them of walking too fast! I may have even quoted Lilo & Stitch’s “Ohana means family and NO ONE gets left behind!”

While the kids opened their Easter baskets in our hotel room, I was under the weather with stomach flu and a sore knee. 🙁

If I had pain in my knee before, I didn’t notice it at all until that trip to Philadelphia. We were at my daughter’s volleyball tournament. To make matters worse on the trip, I also caught the nastiest stomach bug I have ever had. I was sick as a dog…I have never been that sick before. It was so maddening that I was stuck in a hotel room and couldn’t get to any of her games. I saw one of her volleyball games on Saturday morning, rode the double decker bus around Philadelphia, had one of the best cheesesteaks I have ever had at the Reading Terminal Market, and even had a dinner of appetizers and dessert at the hotel. By the early hours of the next morning I was very sick.

I could say that there is nothing worse than being sick in a hotel room away from home, but being sick AND having a sore knee is much worse. When I wasn’t hanging in the bathroom, I was desperately trying to find a comfortable position to sleep. I couldn’t lie on my stomach, side, or back for long without wincing in pain. I was miserable.

I limped for months after that trip. I iced. I elevated. I limited my stair climbing. I stopped exercising. I would have a good day followed by a day of excruciating pain. I finally went to the doctor who sent me for an x-ray and told me to ice, elevate, etc. You can read all about my first diagnosis here. The limping was getting to me. Every step was painful. If I overdid the walking, I would pay for it the next day. I was discouraged. I finally got in to see the orthopedist. After the MRI, I had a new diagnosis…torn meniscus and a cortisone shot. I left that doctor’s office with a less painful knee and almost a spring in my step. But the shot didn’t last long.

By July, I was back to dragging my leg behind me. Every step was painful. The cortisone shot had only lasted one month. I hoped to get a couple of moths relief. Another visit to the orthopedist confirmed what I had feared…the next step was knee surgery. Gulp. I’m no stranger to surgery having had three C-sections. Still knee surgery seemed more serious. I was worried about infection. Worried about my mobility after surgery. by comparison, the c-sections seemed less worrisome.

With a surgery date set, all I could do was wait. Even with some serious knee pain, I passed the time til surgery by decluttering. It was a slow process of dragging a box to a chair all while limping. I sorted through too many boxes to count. I enlisted the help of my husband to move furniture. He’s a very good sport who just nodded when I said I wanted this chair moved to this room. 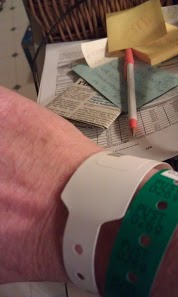 On the morning of the surgery I was up bright and early. Now don’t go thinking I was jumping about all cheerful or anything like that. Jumping was the last thing I was able to do. And cheerful and morning and me are three words that are never used in the same sentence. A better word to describe me was “resigned.”  Resigned to having a surgery. Resigned to going through with a procedure that had a 60-70% chance of working rather than a 100%. Resigned to dealing with recovery from said surgery all while prepping kids for going back to school. But at least the house was in order.

We left the house. I think my youngest was already up. I know my older two were snoozing away. I woke both up to remind them that both were in charge of their brother. I find it helpful to deputize both older kids so that both know that they can “phone it in.” As I left I told my youngest that his sisters were in charge, that he was to be a good boy, and that if he needed anything he should talk to his sisters first, and only call us in an emergency. My husband called home once from the hospital to check on them. My parents arrived midday to babysit.

The surgery took place at a new hospital for me. All in all my stay was very good, if not a little brief. The intake staff were efficient. The pre-op staff were thorough. I got to meet my doctor and the anesthesiologist, which I wanted to do. I was at the hospital for less than 4 hours. A couple of decades ago, my knee surgery would have been an in-patient surgery.

Coming out of anesthesia was not a pleasant experience. For reasons best known to the hospital one of the drinks offered after surgery was cranberry juice. I should have opted for iced water. I was super thirsty and guzzled the cranberry juice. Mistake #1. And then I nibbled a Graham Cracker. Mistake #2. I threw up. As I said it wasn’t pleasant. My stomach discomfort was short lived. In fact, after I threw up I felt SO much better!

I was moved from Post Op Recovery to a Step Down Recovery. From there I dressed, used he restroom, and eased myself in to a wheelchair. My knee was heavily bandaged with a pressure bandage that was wrapped with a large Ace bandage. I could move my knee a little, but mostly it was immobilized.

Crutches. The next step of my #kneesurgery was mastering the crutches. In college, I broke my ankle. I “crutched” around campus for one painful week. I was exhausted. My underarms were on fire. I carried the lightest of backpacks. Minimized my walking but using crutches was torture. I wasn’t looking forward to using crutches again. One week. I told myself that I only needed to do one week and really closer to 5 days, if all was well. I’m happy to say that all in all I did well on crutches. Could be the metal crutches were a little lighter than the wooden ones from college. Could be that I have more upper body strength.

During that first week, I had 3 days of sleeping, eating a soft diet, and putting Lego kits together. Followed by 2 days of doing too much walking and driving too soon. Those two days of activity were followed by two days of comatose activity. I even missed my FIRST back-to-school night in 13 years of having a kid in school. Eeek!

Almost two months later, the bandages are off, stitches out, and crutches hung in the garage. I’m walking so much better thanks to three times a week physical therapy. I’m not walking completely limp free. I won’t ever have 100% range of motion in my knee, but I will settle for not limping like I was before surgery.

← Sporty
Talking To Your Kids About How They Act Online #digifam →