Sponsored: I was given a device and a smartphone for the duration of the campaign, and received payment from Sprint for my blog posts. However, the views expressed in this post are my own.

I thought my teen would NEVER learn to drive. In the first couple of months after receiving her learner’s permit, she took the driver’s education course, did the in car instruction with the driving teacher, and drove here and there with me or her dad. She was on track to get her license in a few more months…or so I thought. Her progress slowed to a glacially slow pace. I mean she took driver’s ed in January of 10th grade and by January of 11th grade she was no closer to getting her license.

We live in a rural area, which means I drive ALL the time. Just getting gas is a 15-minute drive. The thought of having her drive herself to school and volleyball practice made me misty eyed. I could almost taste the free time I would gain with another driver in the house. Except she was in no rush. Partly due to school commitments. I had heard parents lamenting that 11th grade was very challenging for kids…and parents too. I wasn’t sure I believed them until she was in 11th. With a rigorous course load, tons of homework, outside projects, as well as playing on two volleyball teams, getting her driver’s license wasn’t a priority to her. I resigned myself to driving her everywhere even though I was anxious to get her on the road. 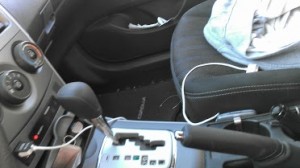 Could this car be any other than the car of a teen?! iPhone cord, balled up school sweatshirt…

This past June with summer on the horizon, I nudged her towards driving by scheduling her driving test. I told her to do her best. In the weeks leading up to the test, she found a renewed enthusiasm for driving. This is the same kid who when I would say “Hey, do you want to drive today?” would reply “No, I would rather read my book.” She passed the test…I was SO relieved. With a driver’s license in her purse, suddenly my reluctant driver was driving to get her haircut, to Walmart for school supplies, and even to her grandparent’s house…and I was sitting a home enjoying the free time!

Though I would have liked her to drive on her own sooner, one plus with her lengthy “provisional” status is that I had plenty of time to talk to her about driving scenarios she might encounter. Also, she drove with a parent for two winters, two springs, one summer, and one fall. She had lots of opportunities to experience different weather and driving situations. But, my daughter is still a new teen driver. I worry every time she leaves the driveway in her car. I hold my breath until I get a text from her that she arrived at destination. With time, I will worry less and less. Until then I am glad to have a way to monitor her driving. Kind of like checks and balances.

I’m working with Sprint M2M (machine to machine) on a safe driving campaign for teens and their parents. I installed a device in her vehicle that gives me updates on her driving. The Spring M2M device plugs in to the On Board Diagnostic port in her vehicle. The OBD port is just below her steering ride above where her left leg is. When I installed the Sprint M2M device, I was surprised as I had never noticed the port, though every car made after 1996 has an OBD. Even if she is driving on her own, I can check her driving online, which gives me great peace of mind. The device I installed in my teen’s car provide alerts to me if she is speeding or driving recklessly, locates a lost vehicle, and most important to me disables texting when she is driving. Here’s a video of me explaining how the device works. You can ask your insurance agent for a UBI device (user based insurance) to put in your teen’s car. 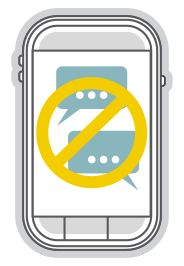 I wanted to share with you some rather sobering statistics on teen drivers shared with me by Sprint M2M:

Teens aren’t the only ones texting and driving. I’ve certainly seen plenty of adults texting, too. In order to avoid the temptation to text and drive, I turn  my phone off or I have one of my kids answer my phone for me. In the carpools I am in, I communicate with the other moms and dads via text messages. Whenever I get a text while driving I either pull over to answer it or have my children answer the text or call or me. I call them my in-car secretary! Works for me since I definitely don’t want to be distracted by phone calls or texts while I am driving.

Oh! Before I forget, join me tonight at the Sprint M2M #DriveSafe Twitter Party on Wednesday, September 25th at 6:00 PM PST! We will be giving away 3 $25 Amazon Gift Cards during the Twitter Party! Here’s a few details on tonight’s Twitter party: