I thought I was so CLEVER. The large box arrived before the holidays. I stashed the box in the corner of the kitchen. With the family calendar and bulletin board up on the wall, I knew that no one would notice a box on the floor. Add an overflowing magazine rack and small computer stand to the mix. Can you picture how a box would be camouflaged in the busy information central corner of my kitchen?

Let’s blame chores, shall we? Months ago I set about establishing a chore routine for the Kid, the Preteen, and the Teen. Dishes, sweeping the floor, and recycling. After weeks of resistance, followed by weeks of half-hearted efforts, and finally some good ole gumption and effort, I finally had a regular chore schedule.

So, you can imagine the utter joy and glee on the face of my son as he dislodged the box I had been hiding after bashing said box with the Swiffer. The poor box didn’t know what was happening. All I heard, was “Clang!” as the Swiffer clattered to the floor, and “Pounce!” as my son well…pounced on the box. Ripped open the box. Grabbed hold off the GeoMag sets in the box. He rushed in to show me his treasures. 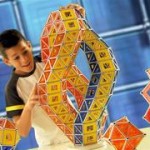 I had planned on bringing out the GeoMags on a weekend or a quiet evening rather than a busy Monday after activities and dinner and homework. Quite honestly, I wanted to shuffle all kids off to bed toute suite. But, do you know what happened? My son played so well with those GeoMag set.

He created what he said was an “ancient house” from the GeoMag Kids Color Set. My son forgot about the scuffle we had earlier over homework. He moved past the fact that he left his glasses case at school. Playing with the GeoMag set was just what he needed to wind down from a hard day.

He built and crafted and imagined and rebuilt many structures from the GeoMag Kids Color Set. The 110-piece set had rods and magnets of varying sizes. The possibilities for building were, quite literally, endless. He used part of the GeoMags to create a house for his train set. Looks to me like a train station or siding.

The GeoMag sets allow for free play. Whether your child wants to join the rods and magnets in a long, almost neverending line or whether she would prefer to build a house, your child will have endless fun with these building sets of magnets and rods.

His tween sister even got in on the act, by building with the GeoMag Glow Set. The set we were sent for review was very appropriate for playing around Halloween or on late nights. Glow in the dark is always very cool!

Want more information on GeoMag? Of course you do!

I was sent several GeoMag Kids sets to facilitate my review. The views expressed in this post are my own. I follow the tenets of Blog With Integrity.