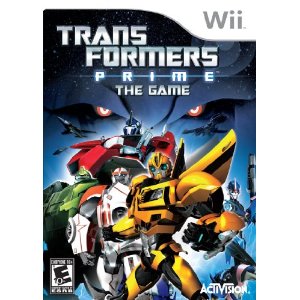 As you can imagine, I was less than enthused about watching Transformers. But you know what? I loved that movie. The special effects were amazing, The robots were incredibly detailed. The writing was tight. There were even funny bits. When the Transformers: Revenge of the Fallen and Transformers: Dark of the Moon were released I didn’t have to be asked twice if I wanted to see them.

Recently a video game arrived that I knew my son would like…because hat video game doesn’t he like?! He took one look at this game, and started jumping up and down. He’s totally OK with showing his emotions…especially if he gets to play a game that he has wanted for a long time. He doesn’t talk much about games he wants to play, so I had no idea that he even wanted the game. As luck would have it, Transformers Prime Wii arrived on a Friday, so there was no need to squeeze pesky homework assignments and cello practice!

What the Kid Liked:

What the Mom Liked:

What You Need to Know:

You can purchase the following titles from amazon using my affiliate links:

For new WiiU gamers, don’t forget that Transformers Prime The Game is now on WiiU.

I was sent the Transformers Prime The game to facilitate my review. The views expressed in the post are my own. Affiliate links are to my amazon account. I follow the tenets of Blog With Integrity.