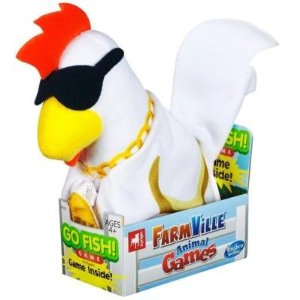 When my oldest was three or four, I bought a Memory game. The Memory cards were simple. The images on the cards were pictures of animals, fruit, recognizable household objects, and toys. We played that game so many times. She never got tired of it. I enjoyed watching her face as she found a match after I had not been able to find a match. Sweet memories.
Hasbro has released three new card games with a Farmville theme:

The three new games are from the Farmville Animal Games range. Each game comes with a cuddly Farmville friend. The games sell for $9.99 each and are recommended for ages 4 and up.

I’ll be honest and admit that I have never played Farmville. I’ve had MANY requests, which I have ignored. I wasn’t sure I wanted to get sucked in to playing a game where I would have to feed someone, water a plant, and grow something. I know what I am like…I would surely let the poor farm go in to disarray. But, for parents out there who are Farmville obsessed, these games come with 20 FARM CASH. Farm Cash is the in-game currency of Farmville, the online game. Note: You must be 13 or older AND have a Facebook account to access the Farm Cash.

You can purchase Farmville Go Fish on amazon.com.

Want to win a Farmville Game? You can win one of the Farmville games by leaving the mandatory comment for a chance to win. You can leave as many of the optional comments as you would like as long as you leave the mandatory comment. Don’t forget to leave your email address so that I can contact you if you win.

I was not compensated for this post. The views expressed in this post are my own. This giveaway is open to residents in the Continental U.S. only. The giveaway ends December 20, 2012, at 11:59 p.m. EST.  I follow the tenets of Blog With Integrity.