Grease! I may not be the biggest Grease or musical theater fan, but Grease: the Soundtrack was the first album I ever purchased. I bought it from Woolworth’s in Wilmslow…a small town outside Manchester, England. It was 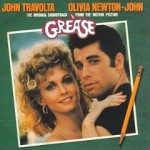 a double album…yes, I am an olde fogey! I could not afford to buy the Grease album

by myself, so split the cost with my sister. In fact, we were protective of our purchase so much so that we bought a plastic cover. I think I still have the album…buried in my parents’ basement!

Want to win a family pack of tickets to see Grease? Go here if you live in DC/MD/VA! I entered!