I found it in my spam folder. Is this not the most maddening thing ever? I mean I read every e-mail I receive. I trust that msn/hotmail will make sure I can see every e-mail that I need to see. I have my filters set to keep out spam. I add people to my user list.

The user list…therein lies the problem with msn/hotmail. If I don’t know you your e-mail ends up in spam except when  it doesn’t. I have no idea why some e-mails — “You have won the lottery!” — end up in my inbox whereas one about an event I very much wanted to go to went to spam. Mystery! Unsolved!

The event in question was Grand Theft Childhood with Cheryl Olson. Great name for an event. Definitely piqued my interest once I dragged the poor e-mail out of my dratted spam dungeon, that is. 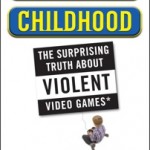 On October 19, Dr. Cheryl Olson, co-author of Grandtheft Childhood, spoke at a media summit in Washington, D.C., to discuss important issues surrounding children, their health and wellness, and reframing the view of video games.  An underlying theme of the summit was how video games impact youth. Attendees — bloggers and journalists — got a sneak peek at one of the hottest toy brand video game adaptations and a supporting example of Dr. Cheryl Olson’s findings: Bakugan: Defenders of the Core.

Due to a variety of pressing work matters, I was unable to attend the event. I did, however, have the pleasure of interviewing Dr. Olson via phone.

Dr. Cheryl Olson, co-author of Grandtheft Childhood, is a former teen issues columnist for Parents magazine and was the principal investigator of the first federally funded, large-scale research project to take an in-depth look at the effects of electronic games on preteens and teenagers. She has served as a health behavior consultant to a number of nonprofits and corporations, and is an award-winning video producer and writer. Olson wrote the book Grand Theft Childhood: The Surprising Truth About Violent Video Games and What Parents Can Do

with her husband, Dr. Lawrence Kutner.

Musings: How will you present the information from your study Grand Theft Childhood to parents?

CO: Parents need to apply common sense when analyzing how their children interact with computer games. Activision was a sponsor of her research for Grand Theft Childhood.

Musings: What is your view of the current labeling of games?

CO: A typical 14-year-old is playing M for Mature games. M games focus on blood and language. There is less sexualization in U.S. games, than in games popular in other countries, but more violence. Parents are bothered by war, blood, and violence. Video games encourage reading.

Overall the ratings given constraints are doing a good job. Games that are T for Teen should be avoided by younger kids. The SWAT series tries to avoid extreme violence. Some kids who have older brothers will play more violent games than those without.

Parents should have open dialogue with their children about games and ratings.

Musings: What is the current state of parent and kids when it comes to computer games?

CO: Parent mediation. Kids hear “we don’t allow those games” Adults should say “what is it about those games that bothers me?”

CO: Passwords should be unbreakable — don’t choose your house number for the access code to the adult-rated movies on cable or FIOS. Parents should take computers, cell phones, and other electronic devices out of kids’ bedrooms.

Editor’s note: In our home, we are currently dealing with our teen who wants to be logged on to the computer all hours of the day. We are setting limits for “computer for play” vs. “computer for schoolwork” usage. It’s a work-in-progress.

Musings: What is your thought of kids who play games online with friends?

CO: From our study — Grand Theft Childhood — we found that kids say it was more fun to play with real people rather than artificial intelligence (AI). Kids from poor neighborhoods or kids from the more well-off suburbs all had some way to get online.

In our study, we looked at games. Kids were only asked structured questions about the game itself. From my study of games played online if someone hopped on and asked for personal information it would stand out. Kids want to play the game, not talk to strangers online.

In many cases with online predators, if kids are approached online it might be someone they know — relative, neighbor, etc. A good rule of thumb is to keep the game system in a commom area of your home.

Musings: To Catch a Predator — the popular NBC show where adults prey on young kids who are actually adults acting like kids. Is this happening with online games?

CO: No, sexual predators are mostly “hanging out in chat rooms.” There are a few cases where kids who play video games are looking for someone to pay attention to them.

Musings: What about the crime rate for youth?

CO: In fact the crime rate for youth has been going down for years. A factor in the downturn is school antibullying programs. Simple assault, however, has gone up. Police if called to a home due to a complaint of assault are mandated to arrest someone, which creates artificial levels of assault date. Overall, crime is down with young people.

CO: Often corporations will add cookies to track kids behavior. For instance, when kids are encouraged to play video games that are part of a site that features a sugared cereal.

Musings: Tell me about the game that was featured at the Grand Theft Childhood event?

CO: Activision released an E 10+ game based on the Bakugan TV show. The game is called Bakugan: Defenders of the Core. (Review of the game to come. My 7-year-old son screamed and clapped his hands together with glee when he saw the game. He loves playing!)

Musings: After all the talk about ratings and blood and gore in games, what is right with games?

CO: There are many positives in games not labeled as educational. For many games, kids are required to figure out a problem/solve a mystery. There is a frustration factor to games where kids play a long time to get payoff.

Kids in early elementary school like to collect and sort and categorize. Memorize the names of characters, objects, etc. Kids like to sort, which is a necessary part of a child’s learning process. Bakugan: Defenders of the Core has  benefits for mental development. The Bakugan game is released in the following formats: DS, wii, PS 3, and XBox

In the Bakugan game, kids can customize their character. The Bakugan game encourages kids to read and strategize to proceed through the levels of the game. Often kids talk outloud about how to play the game.

Musings: What are the features of Bakugan: Defenders of the Core?

CO:  Well, the game is rated E 10+. There is some battling and conflict between characters. However, no characters are killed.

Musings: The Bakugan game is rated E 10+. What would the experience of playing the game be for younger kids? Is the reading level too high?

CO: Younger kids may not be able to manipulate the characters as well as older children. May get frustrated.

During the focus groups for my Grand Theft Childhoood research, most 10-year-old boys thought Grand Theft Auto was a driving game. The boys didn’t focus on the complexity of the plot or storyline. Adult content of games will often goes above their heads.

Musings: Describe the focus groups you convened for the Grand Theft Childhood research?

CO: Kids know that commercials are trying to sell them something by 7 or 8. After watching the Teenage Mutant Ninja Turtles and Power Rangers, kids will karate chop each other, but not with the intent to hurt each other. Kids are acting out what they have seen in TV and movies. Kids learn how to distinguish between rough and tumble play and violence.

Violence — experts say kids won’t pick up violence from media, but from their home and the streets.

Musings: How did you pick the kids for the focus groups?

CO: All the kids were from Boys and Girls Clubs inner city Boston. (Kutner and Olson were based in Boston while researching Grand Theft Childhood.)

The focus groups were advertised at Mass General Hospital, which is affiliated with Harvard Medical School. Many of the focus group participants were children of hospital and university employees. Posters were also placed in places like ice cream shops.

We were looking for boys who had played Teen rated games so that all the kids had something to talk about and wouldn’t be shocked by the game. Parent approval was needed before a child could participate in the group. Kids were paid for their participation — $50 per kid.

Musings: Did the kids play the games as part of the focus group?

CO: No, we printed out screen shots of the games. We did not include violent screenshots. We asked the kids what they liked about the characters. Which character they want to be. One kid said “I would protect someone who would be bullied if I was this character.”

Musings: What were the games used in the focus group?

CO: Most kids played a variety of games. Kids would love to play with parents if parents are willing. Parents can now play games with kids. Some kids will teach kids how to play games. Some parents may find that kids play too many violent games. Parents should encourage kids to play the sports.

Kids like to be the teacher. Once parents see that game requires skill, parents are more likely to let kids play.

CO: We had a sense from survey what kids games kids played. Kids were with kids they didn’t know, so were less likely to exaggerate. Kids asked each other questions about what games they had played.

Musings: Are there distinct differences between boys and girls video game play?

Girls are often drawn towards Zoo Tycoon, while boys prefer violent games. In the research study, more boys wanted to win the game/compete than girls. Only 25 % of girls strongly agreed that they wanted to compete and win.

Musings: Where are you now?

CO: My husband and I were wiith Harvard Medical School, but are now based in Virginia. We are doing research  on patient-doctor communciation, and the relationship of media and kids.

I was not compensated for this interview. I was sent two copies of Bakugan: Defenders of the Core — one to review and one to giveaway.