Disclosure: I was sent a Skylanders SWAP Force Starter Set to facilitate my review. 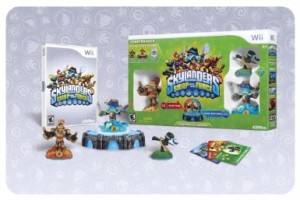 Skylanders SWAP Force is now out. My youngest has had great fun testing out this new game. You can go here and here for his review of Skylanders Giants, the second version of the game. He also reviewed Skylanders Spyro’s Adventures, the original game.

You could say that my son LOVES Skylanders. He’s a very big fan…possibly the biggest. The games are a hit with friends and family. He has taken his Skylanders to friends’ houses to play. He loves that even though friends have different game systems the Skylanders figures are universal and work with any game system.

Skylanders SWAP Force allows players for the FIRST TIME to swap their Skylanders figure. Each Skylander comes with a top and bottom half so that game players can create all new characters. They can also swap the top and bottom of figures to give the figures different powers.

This game is a surefire winner in our house. I’m sure your kids will love it too. I just know that it will be a top item on every kid’s holiday list! Skylanders SWAP Force is on the following list:

SWAP Force comes with a new and larger Portal of Power and one torso and one pair of legs for each character…one for each. The characters in the SWAP Force Starter Set are called Blast Zone and Wash Buckler.

You can connect with Skylanders SWAP Force on social media:

← Take the Hassle Out of City Driving #seizingfamilytime
Grab a #BlackFriday Deal with RetailMeNot! →