Every so often you go to a play or a show or a movie or an event where you are totally in awe. The show FAR exceeds your expectations. I had that experience at a show on Thursday. I knew I was going to see a live show with animatronic dragons, actors, and special effects, but I could never have imagined what the show would turn out to be.

I took my husband and kids to see How To Train Your Dragon Live Spectacular at the Verizon Center in Washington, D.C. I’d been to the Verizon Center before to see an ice show with the kids and a basketball game. As we entered, I could see that where the ice would have been was a large squared area with sides that was about 6 feet tall. Kind of looked like a skate boarding arena just without all the jumps. In an after show Tech Talk — Dragons 101 — we learned that the floor is the size of 18 movie screens and includes 240 magnetic, square tiles. On the floor was a small circular stage. Above the floor, towering high in to the rafters of the Verizon Center was a rigging device holding lights. I was intrigued and wondered why the show would need such huge rigging equipment. 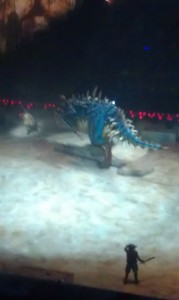 Now, I expected to see many dragons. Tall ones. Huge ones. Even a few with moving parts. Perhaps even a flying dragon or two. But I never expected to see SO many dragons in one show. How To Train Your Dragon Live Spectacular included dragons using the following techniques:

We learned more about the dragons and how they work at an after-show Tech Talk. The Dragons 101 Tech Talk is part of A Hero’s Welcome VIP package that you can purchase in addition to your ticket. The Hero’s Welcome includes a Meet-n-Greet, the Tech Talk, professional photo, program, gift bag with show merchandise, VIP Parking, and more. During Dragons 101, we learned: 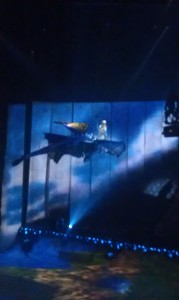 The show was long too. Probably over 2 hours including the intermission. While the dragons are spectacular, especially the flying ones, the storyline is a good one. In other words the show is about more than animatronics and flying animals. Hiccup is a good guy who is misunderstood by his people on the Isle of Berk. He doesn’t fit the mold and shouldn’t have to be one of the guys to fit in. I loved seeing the progression of the Isle of Bek townsfolk as they realize that Hiccup has much to offer them.

You can find a show near you.

Buy a ticket to How To Train Your Dragon Live Spectacular.

And you can use Promo Code “MOM” to get 25% off the ticket price!

I was given a family 4-pack of tickets to the show, a program, and tickets to the Dragons 101 Tech Talk. The views expressed in the post are my own. I follow the tenets of Blog With Integrity.