I won an ipod touch. I know! Can you believe my good fortune? I won it before Christmas. It was a Christmas gift to myself…except my kids pounced on it. Two have ipods and were anxious to check out the itouch. One kid just wanted to get his hands on a gaming device.

The day before Christmas was the last time I had the itouch in my hand for any length of time. I have found the itouch in sports bags, on bedside tables, in a child’s hand during homework time, and on a bedroom floor under the bed. As you can imagine, I was not happy at finding the itouch on the floor. We had a few conversations about keeping expensive items safe as you can imagine.

My kids have spent the last few months downloading apps to the itouch. Our family rule is that they can download free games and applications with my prior approval. Yes, I have found a few games and apps that were downloaded without my permission, but at least the games and apps were age appropriate.

Math is a subject I have issues with. One kid is good at math, but has doubts. One needs to get her math facts down…has them some days, but other days is shaky. One kids loves math and counting. I am always on the look for ways to make math more accessible, easy-to-learn, and fun. 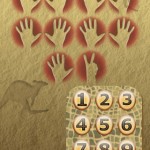 I found Arithmaroo on twitter. I was sent an app called Arithmaroo 1: A Counting Math Game for Kids–available on iTunes–to test. Arithmaroo is a “right brain” approach to math that develops early math confidence and nimble math minds. My younger kids has great fun playing the game. I’ll let you in to a secret…I had fun playing it too! I kept on clicking on the numbers to get the right answer…I am not a gamer, but even I found Arithmaroo quite addictive.

Arithmaroo 1 is an engaging game that helps children move from counting to seeing “how many” in patterns. More apps to come from Arithmaroo:

Instant Subtracting — Avail. April 2010. Learn to “see” the differences in simple subtraction. 8 levels. Timed and scored. Records up to 4 players.

Instant Multiplying — Avail. April 2010. Learn to “see” multiplication facts to 10×10. Start with the simplest patterns and build on them. 8 levels. Timed and scored. Records up to 4 players.

Instant Dividing — Avail. April 2010. Learn to “see” division facts. Start with the simplest patterns and build on them. Timed and scored. Records up to 4 players.

Want to see Arithmaroo in action? You can also view a quick demo on YouTube.

I have a free code for Arithmaroo 1: A Counting Math Game for Kids for one lucky reader of Musings from Me. One comment = one entry. Enter now!

I was given a code for Arithmaroo for review, but I used my itunes card instead. This giveaway is open to U.S. and Canadian residents. Giveaway ends April 30 at 11:59 p.m.

1 comment for “App of the Week and a Giveaway: Arithmaroo”