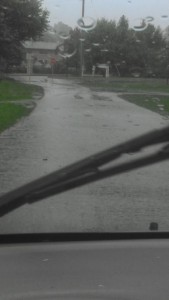 A couple of weeks I watched the rain. It rained and it rainied. From drizzle to high winds to heavy rain, it did not stop raining all week. The low point of that very wet week came on Friday. I stepped in a puddle. And it was a big puddle as well. Of course, I was late getting to the doctor as I had to drive everyone to school. Only happens on a rainy day, am I right? And of course, I not only didn’t have a raincoat but my umbrella was MIA. Am I even English any more?! I may have to hand in my British card at this rate! With two wet feet, I squelched in to the doctor’s office. Got wetter as I left that appointment. No let up as I visited the Verizon store. By the time I got to my physical therapy appointment, I was a little shivery. Uh oh. I don’t have time to get sick.

Friday was one of my “running errands all at once” type of days. The day before I hardly left the house. But on errand days I am relentless and will do as many errands as I can. Friday was no exception. After PT, it was over to get gas. From the gas station, I drove over to CVS. It was so wet and I was so cold that I was lazy and parked until a curbside space opened up outside CVS. My feet were still wet…hours after stepping in the puddle. Is there anything worse than wet feet?

1 RX and 1 flu shot later I dashed to my minivan where I got drenched again. Miserable. Once home, I warmed up a bit under a blanket with a mug of coffee. I wanted to stay home, but had to go out to a school event that night. And you guessed it the rain was still going strong at the school event later in the evening. I made the decision not to wear a coat as I don’t have a raincoat and didn’t want my coat to get more wet. I found an umbrella. As my son and I headed in to school, I decided to leave my purse in the car. I had my keys and phone, he had money for raffle tickets. Of course, you know what happened, don’t you? I had to go back to the car twice to get first a pen and then money for food. Yep, it’s like I wasn’t wet enough and needed to get wetter. Not! 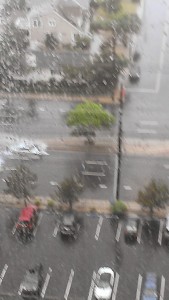 The relentlessness of the rain reminded me of our beach vacation to Ocean City, MD. Lately, our week at the beach is less a scorcher and more windy and rainy. Strange since we only go in July and August. For at least two days of the last few annual beach trips, we have at least one rain out day and another day or so of windy days. This past weekend was no different, except that the rain was more monsoon than drizzle.

From our condo balcony, you could see the water pooling on the Coastal Highway. I wondered if the road would flood. Cars were skidding. The traffic slowed down considerably. The beach was deserted. Even the lifeguard chairs were empty. They had ducked for cover. Rivers of water were coming off the sand dunes.

My view from our rented beach condo that monsoon-y day was a far cry from my view a couple of months ago. I was asked to go on a press trip for 5 Minutes for Mom to one of my favorite cities, San Diego. What I love about San Diego is the climate and the zoo! I was there in June and it was hot but not too humid. I was in SD for the first time in August and I never saw a bug the whole time I was there. I was in places where the windows were open and not a bug flew anywhere near me. Heaven.

My second trip to SD was brief…just over 24 hours…but I loved every minute of it. Here’s a few photos to remind me that it will be sunny soon and that the rain is not here to stay…at least I hope not! 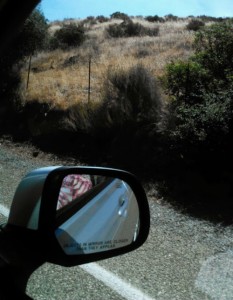 Driving by the water… 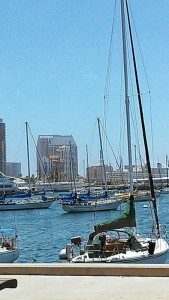 View from the airport… 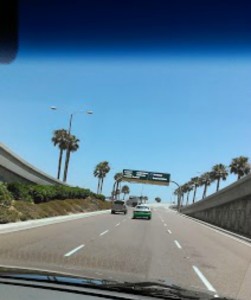 Disclosure: I was invited to San Diego to cover the Nissan Versa Note press event for 5 Minutes for Mom.

← Back to School: Taming the Homework Beast
Get Ready To Do Battle With the #BeyWarriors #chatterbox #giftguide →