Quite a few years ago, my husband and I took back-to-back trips to the U.K. Two major trips in TWO years seems so decadent and extravagant. But, it was different back then. We were practically newlyweds. Both super busy at work. No children to have to worry. My husband had summers off with his teaching job, but even I could scare up 10 days of vacation to go on both these trips.

The first trip was my first time back in England in 5 years. I was on the verge of becoming a U.S. citizen, so I recall enjoying flying back to England for one more time in my British passport. On that trip I introduced my husband to all that is England. We strolled around Bath, walked the length and breadth of Stratford, walked the Lake District, and toured all the sights and sounds of London. But, while we saw many parts of England, we hadn’t seen any of Scotland.

As a middle schooler, I took a day trip to Edinburgh. I recall walking the Royal Mile once we arrived in Edinburgh by train, but that’s about all. Oh, I bought a set of drink coasters for my parents that were made in Wales. #tourismfail On our second trip to the United Kingdom, we visited parts of London we hadn’t seen on the first trip, but mostly we toured Scotland. Glasgow to Edinburgh to Glamis Castle (basis for one of the settings of MacBeth) to Inverness and finally the battlefields of Culloden.

As I stood on the battlefields of Culloden I couldn’t help but think of Scottish soldiers fighting to the death AND wearing only kilts. The weather was awesomely cold, and by cold I mean to say that it was July and we had to withstand gale force winds. Wrapped in as many layers of summer clothing as we could find in our suitcases, we got a real sense of how bleak the Scottish Highlands are. And did I mention that the soldiers would have been wearing kilts?? Brrrr.

Speaking of kilts…Feast Yer Eyes on this! 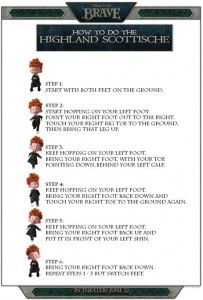 I will be attending a screening of Brave with my family next week. Be sure to follow me on Twitter or Facebook or come back to this blog for my review. The views expressed in this post are my own. I follow the tenets of Blog With Integrity.