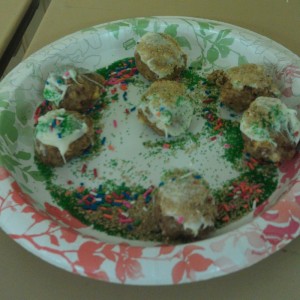 I should be embarrassed to post this photo…but I am not. This is my attempt to make “gold bullet” cake pops for my son’s Western-themed Cub Scout Blue & Gold cake auction. We…although my son didn’t want to take any credit for baking the cake pops!…had the dubious distinction of being the last cake bid on. This year my son enlisted his dad to make a most awesome Captain America cake!

Have you seen that show? Worst Cooks in America? I saw the show the other night. I could be a contestant on that show. Seriously! Why have I NOT applied to be on that show?? Heck, I could even win that show!

My middle child is a picky eater at best. Mealtimes for her a minefield. She never knows what to expect when she comes down for dinner. She eyes the pans with a very concerned look. She grills me about whether I burned the dish or not. She asks whether I substituted any ingredients. I’ve been known to improvise if I don’t have a certain ingredient…except I lack the cooking acumen to know what ingredients can be swapped out. Dinner is stressful at my house!

My husband comes home from work at varied times. I have a vague idea of when he will come home but about twice a week he walks in to either no signs of dinner preparation a partially cooked, kind of thrown together concoction for dinner. There are many nights where I want to throw in the towel. You see as a work-from-home mom who drives an afternoon carpool once or twice a week, making dinner is not top priority.

Dinner is always on the table for my family, but I don’t pre-plan what I am going to make. In fact, if I did more crockpot meals I would be SO much less stressed out about dinner. But alas crockpot meals require buying ingredients ahead of time and prepping those ingredients in the mornings. I often think about making a crockpot meal at midday, which is a “day late and a dollar short.” So, I have a couple of go-to quick meals that are my saving grace. And if I stand directly by the oven and make a concerted effort NOT to check email, I am usually able to make a decent meal. At least one day a week, my husband takes over dinner prep. He’s an efficient, quick cook. The kids don’t turn up their noses at his food at least!

The fact that I don’t have any pizza places or restaurants that deliver to my house is a huge boon to my family’s budget. I live too far out in the middle of nowhere to get delivery service. We would go bankrupt(!) if we could order pizza. Heck, the kids would be diving for the phone most nights! I know I would rather call out for pizza than cook!