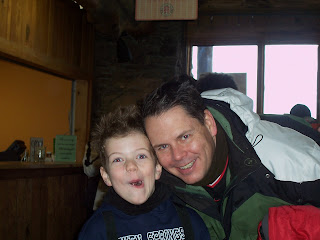 Coach Dad and Adevnture Boy after their skiing mis-adventure — will post about this soon. 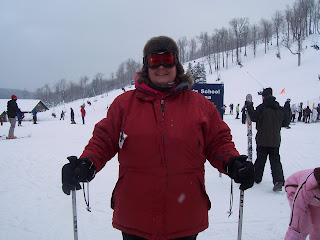 Why, oh, why, do I keep using this dreadful photo of myself…

Twas the summer of ’86. Hot as anything in Rockville, MD, just outside Washington, D.C. I was home for summer break from college. After a few days of frantic looking I landed a summer job reading and taking notes on documents.

Our team was divided in to three groups. About two weeks in to summer I was promoted to the Quality Control team a long with a tall dark-haired, very young looking college student. A group of us from this team starting eating lunch together. I talked a little to Jim, but mostly in the group setting.

I had just turned 21. Jim was not. I asked him once or twice if he wanted to go to Happy Hour at a local hotel. He said no each time. I did not know that he was not 21.
The summer ended and all of us exchanged mailing addresses. This was ’86 — so there was no e-mail, cell phones, texting. Many families did not have an answering machine. I corresponded with Jim for a few weeks.

In October I came home for October break. We arranged to go to a movie — Crocodile Dundee with a stop for pizza. At Godfather’s pizza. We closed the pizza place down. We were so intent on talking to each other that we did not notice the vacuuming around our feet.

We met the next day. I went back to college until November when I came home for a weekend visit to my parents. We went to see another movie (Peggy Sue Got Married?). On the way back to my parents house, he asked me if I would go out with him. It was the most romantic moment of my life at that point.

From that day in November of 1986 until we got engaged Xmas of 1989, we dated. We experienced many highs: two college graduations, two first real jobs, I moved in to a place of my own, we purchased a house together, and planned a wedding and honeymoon. We also experienced the loss of two people dear to us: Jim’s grandmother, who died before I got to meet her, and Jim’s younger brother, who died a tragic, untimely death of an undiagnosed heart condition. We shall always remember this young man though our son whose middle name is Stephen.

We married on July 28, 1990. Honeymooned in Nova Scotia and Prince Edward Island. Moved in to our first house after the wedding, NOT before. I changed jobs twice. We moved to a home that we built in July 1994. Our first daughter was born in 1996. Our second daughter in 1998. Our son in 2003.

And, that is the story of how we met.

← Musings on Schooling, Working, and Writing
Twitter and Me in 140 Characters or More →