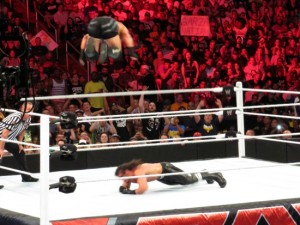 It’s hard to put in to words an experience like WWE Raw. The lights. The roar of the crowd. The power of the wrestlers. The showmanship. The excitement as one wrestler tosses another wrestler off the top of the ring. We laughed. We gritted our teeth. We gasped. We wondered how a wrestler could be slammed and then jump up a minute or two later. As I said, words don’t do justice to our experience, so watch this video to get an inkling of the excitement of a WWE Raw show. 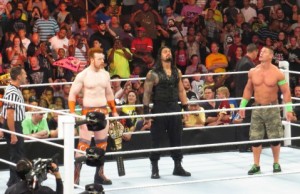 Disclosure: I was given tickets and two gift bags for my kids for WWE Raw as part of my review. I was not compensated for this post.

← Wordless Wednesday: Do We Need To Buy a Ticket for Yoda? #DisneySMMoms
I Spy With My Little Eye…a Quick Dinner Option for Summer Nights #familydinner #familygamenight →