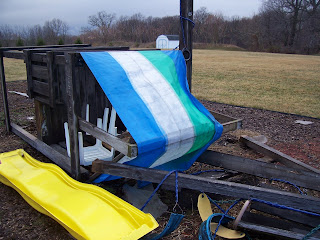 Our swingset was crushed by hail in 2005 (see above). It looked as though a giant stepped on the swingset.

In August 2003, just before Hurricane Isabel hit the East coast, a Little Tikes playhouse blew off our playground area and in to our kitchen window. Our family has never been the same since this event. My oldest–a tiny 2nd grader at the time–was standing beside a kitchen chair when the playhouse blew in to the window. There was a ragged pain of glass about 2 feet long resting on a chair just one foot away from her. Scary stuff. Life-altering stuff. Get-down-on-your-knees and pray that your child’s life was spared stuff.

Just 5 minutes before the storm started raging and the wind was so heavy that our house was shaking, we had been sitting around the kitchen table. My 2nd grader was doing a math worksheet. My new kindergartner was coloring an alphabet sheet. My 5-month-old was sitting in a highchair next to the kitchen window. At the point the storm was increasing in intensity I sent my kindergartner up to change for soccer–why, I don’t know since the storm was obviously going to preclude soccer practice. I put the baby in the swing in the family room…he was at the age where when I did something around the house I needed to put him somewhere safe…bouncy seat, swing, stroller, high chair. I tended not to leave him on the floor on his activity mat since his sisters were 5 and 7 and often not that careful where they walked.

I left my 2nd grader in the kitchen doing homework as I went outside to bring in some of the outdoor toys: a Step2 slide, a Fisher Price basketball net, a soccer goal. Within seconds I was soaked. I dragged a couple of toys in to the garage and heard what I can only describe as an almighty crash. I dropped the slide and ran in the house to hear the baby screaming at the top of his lungs. I ran past the swing and in to the kitchen and saw my 2nd grader standing near a chair that had a huge piece of broken window pane leaning on it. The silence from my 2nd grader was in stark contrast to the wailing from my 5-year-old and 5-month-old.

The floor was covered in water. The children’s homework was strewn around the kitchen. There was a Little Tikes playhouse in pieces outside the broken window. There was nothing I could do about the mess while 3 children were in different states of shock. The only thing I could do was grab the baby out of the swing and tell the girls to go down in to the basement.

I sat on the couch and hugged all three children tightly. I am not an outwardly religious person, but to be honest praying came naturally to me at that moment. I clung on to my children and prayed to God about how thankful I was that he spared my daughter’s life.

My 7-year-old daughter is not a child who talks about her feelings. To this day she has never mentioned the incident. I think of the incident every time the rain starts and I ponder what toys will go flying around the yard this time.