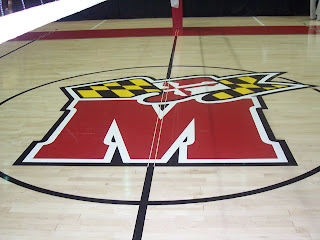 My friend FireMom over at StopDropandBlog is giving away a Pepsi Super Bowl XLIII prize pack. The pack contains:

FireMom has asked me to blog about who I would support in the Super Bowl. Well, I live near Washington, D.C., so I would have to say the Redskins. However, I’m from England originally, so back in the day I supported Manchester United (soccer). I’m really not a sports fan per se, but I am surrounded by a husband, a father, and three children who are sports players and sometime watchers of sports. Let’s just say that only Redskins gear is permitted in this house. I need to check my photo files for the children in Redskins gear. Hang on, I’ll be right back…

I’m back. I couldn’t find one of the kids in their Redskins gear, which is shame as the shirts are really cute. But, here’s one of two of my children on the volleyball court after a women’s University of Maryland volleyball game. 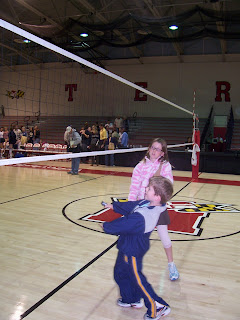 Oh, and here’s my son with three of the University of Maryland players. He looks happy in this photo, doesn’t he? 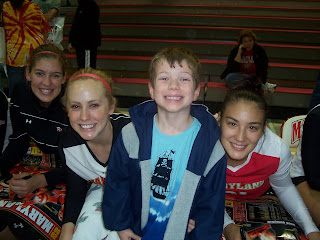 My children go to school with kids who support the Baltimore Ravens or the Washington Redskins. At the school Fall Festival it was my job to be the PTA person in charge of walking the Ravens mascot “Poe” around the school. I felt so sorry for the guy in the costume. The costume was so heavy. He was sweating profusely when he took it off. Also, the kids were so rough with him. I was manhandling Poe through doorways to get away from exuberant kids. It was crazy.

1 comment for “Terps, Redskins, Manchester United: We Support ‘Em All”