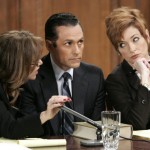 Probably, all of the above account for the reasons why I dislike Sonny Corinthos. Yes, yes, I know he’s handsome (not my type), wealthy, and connected, but come one he’s a manipulative mob boss. He has most of Port Charles living in fear of his reprisals. He can commit almost any crime and get away with it. Yes, there I go again with my sense of right and wrong.

Of course this is a drama. It’s not real. I get it. Sonny is a TV character NOT a real person. Still I prefer characters who are more truthful, honest, and good.

Who are my favorite characters?

Jax — Like me has a strong sense of right and wrong. He is loyal to his stepkids…who are Sonny’s kids. He’s married to Carly…a master manipulator…’nuff said.

Lucky — drug addict who is back on the force. Raising two and perhaps 3 kids who are not his own.

So, what do you think? Do you like Sonny? Can you like a character even if their actions are suspect or wrong?

I am a participant in a Mom Central campaign for ABC Daytime and will receive a tote bag or other General Hospital branded items to facilitate my review.