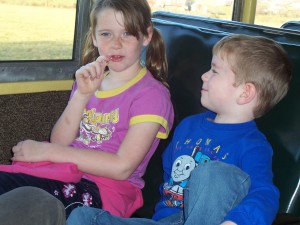 Enjoying a candy cane after seeing Santa on the Walkersville Railway.

I wish I had digital pics from the 90s. My oldest was about 1 years old when we attempted to have her sit on Santa’s lap. The photo that we got from the mall was a Polaroid — OMG, could I be any older? Well, perhaps if I said that the man who took our photo placed his head under a cloth and used a huge lightbulb to illuminate the photo…

What started as a “Let’s take the baby to get her photo taken” turned in to “Why did we take the baby to such a traumatizing experience?” and “What were we thinking?” She screamed and was mad and screamed. I had to hold her as she was petrified of Santa.

We did not make a return trip until my oldest was almost 4 and the youngest was a baby. Again, I need to scan those photos.

My tips for successfully photographing a toddler on Santa’s lap:

– Make sure toddler is fed, dry, and not ready for a nap.
– Bring a spare outfit or pack a bib in case you have to feed her in the line for Santa.
– Look at the sign near Santa’s Workshop…if you are near Santa’s break time come back later. there is usually a clock near the photograph place.
– Bring your own camera. Insist on taking your own photos. Sometimes the official photos are too expensive.
– If your child is frightened of Santa, come back another year. We took our 1-year-old to see Santa. She screamed when I put her on his lap. I sat with Santa. We came back when our oldest was 4 and our second child was 1 and had a much better experience.
– If the mall is too overwhelming, check out other Santa’s — church, health club, preschool. My oldest hated the mall Santa, but was O.K. with the Santa who visited her preschool since all her friends were also OK with sitting on Santa’s lap.

The photo above was taken on the Santa train at the Walkersville_Southern_Railroad. The Santa who walked along the aisles of this train was so attentive to the kids. He read their letters and asked them many questions. In fact, I was so focused on how much fun my children were having that I took no photos with Santa! The Santa train was a great experience for my train-loving 2-year-old.