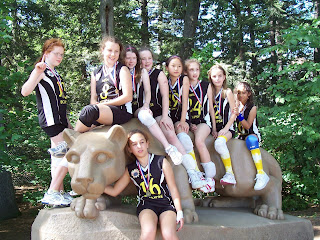 So, this weekend was gavel-to-gavel volleyball. On Saturday I sat for 3 hours watching one daughter. On Sunday I watched another daughter for 8 hours. 11 hours. Yikes. As you can guess blogging was not my top priority this weekend.

Moments from the weekend…

Saturday tournament…Finally meeting and chatting to three moms on my middle daughter’s team. Coach Dad is Sporty Daughter’s coach, so I rarely go to practice or games. The moms were nice to chat with…I wish I had time to get to know them better. But our drive-by conversation was fun. Friends for a day!

The tournament did not go well for Sporty Daughter. Not sure why. Just not her day to be in the volleyball zone. One bright spot for her…there was a snow cone…she was happy.

A mom stood in front of me as I was watching Sporty’s game. She was so thin my view was not obscured at all. Hate. Her.

Looking over at Adventure Boy and realizing that he was so glued to his Leapster that a freight train could have rolled through the gym without him noticing. I chose not to remind him that we were there to see his sister’s game…he was so quiet why mess with a good thing. Know what I mean?

Asking Crafty Daughter about the birthday party she was scheduled to attend that afternoon and realizing we did not know location, start time, or phone number for mom. Nice! Yay for cell_phones.

Standing outside birthday party house cleaning all the %$#@ out of my van so that I can fit actually seat kids on seats for drive to mall. My van = another post entirely!

Sunday tournament…marvelling at the food kids consume at tournaments. My skinny daughter managed to eat: 2 cheesesticks, 1 yogurt, 1 sandwich, 2 cookies, 1 slice of pizza, 1 frozen slushie, 1 protein shake, 2 bottles of water all by 10 a.m. She’s a picky eater, so for her to eat this much is astounding.

Realizing that I was outsmarted by my kid…I told her that in order to get food from concession stand (AKA Money Pit) she had to eat what was in the cooler first. Cooler empty by 10 a.m. Score one for her.

Enjoying the unexpected reading time…read 300 pages of the The Story of Edgar Sawtelle: A Novel

My reading marathon started in earnest when husband confirmed that he would come to take my place so that I could go to Book Club. Yay for Coach Dad! Yay for actually reading the Book Club book! Yay for Safeway and delicious cooked-not-by-me cookies to bring to Book Club.

Chuckled as I watched mostly 13-year-olds playing tag in between games, food breaks, and cell phone texting. These girls may be teenagers, but I love that they still want to play!